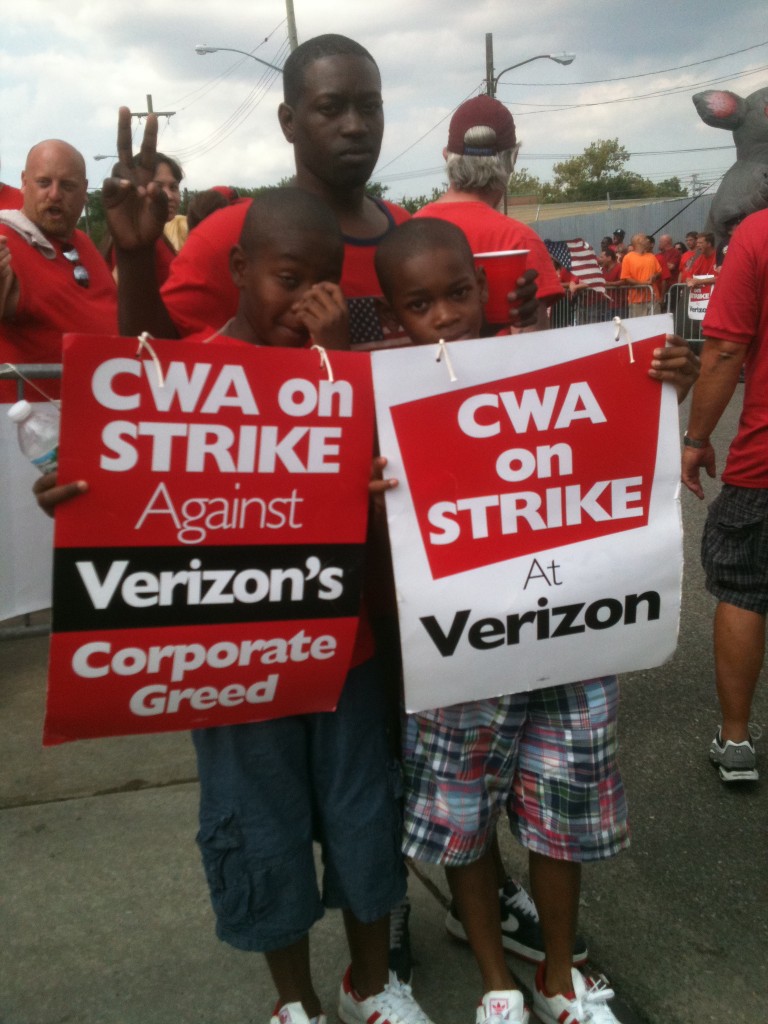 Despite the largest outburst in decades of popular discontent in Wisconsin and through Occupy Wall Street, the labor movement is still, for the most part, fighting an uphill battle. The successful resolution of the Chicago teacher’s strike is a significant indicator of hope. However, the Communications Workers of America (CWA) and the International Brotherhood of Electrical Workers’ (IBEW) proposed new contract with Verizon almost inevitably leads those concerned with equity to a sense of concern.

The new deal requires that workers pay for health care for the first time and eliminates defined-benefit pensions for new hires (thus introducing the dreaded two-tier system). While 37 of the 41 workers fired during the strike will be rehired, four will not, and none of them will receive back pay, resulting in a chilling atmosphere at Verizon for those who engage in militant rank-and-file activity.

The contract was proposed on September 19, 13 months after a raucous two-week strike had more than 40,000 workers on the picket line — considerably larger than any strike in the United States in both 2011 and 2012.

Kevin Condy, the Secretary-Treasurer of CWA Local 1101 in New York City, whose local executive board has been the only one covered by the contract that is calling on union members to reject it, is unhappy with the deal.

“[The deal is] just concession after concession,” Condy explains. “It seems that there’s nothing that wasn’t touched. We gave up the sick time. We’ve got the two-tier system. Gave up job security language. For medical, they penalize you for using the plan. There’s a lot of changes in the contract on a day-to-day basis. [Verizon is] looking to reclaim a lot of things that were won over 50 years.”

John Colloran, a member of IBEW Local 2222, was one of the workers fired by Verizon for strike-related activity. He also opposes the new contract. “As of now [my vote] will be ‘no,’ because one of the guys in my local isn’t going back,” said Collaran. “I’d say to myself, what if it was me? I wouldn’t want to vote ‘yes.’ I would go back out and fight for my job.”

Verizon’s predecessor, NYNEX, was also active at suppressing dissent on the picket line. Gerry Horgan, a shop steward at the time of the 1989 strike where the sticking point was whether or not workers would pay for health care, was ran over and killed by a scab, who was the daughter of a manager. She was never prosecuted.

Verizon has made $5.7 billion so far in 2012. And with the massive redistribution of wealth brought on by neoliberalism telescoping in the aftermath of the financial crisis, Verizon was going to get every single cent out of its workforce. It claims that it needs the givebacks because the contract covers the landline division, which is losing lots of customers switching to wireless-only service, but neglects to point out that it has been systematically disinvesting in its signature fiber optic FiOS system, which is installed by the landline division.

Don Trementozzi, the President of CWA Local 1400, who also ran for secretary-treasurer of the International last year as a reformer, was on the bargaining committee — along with 1101 President Keith Purce — and thought that this was the best deal that they could get.

Are we all happy? No. It’s tough to swallow that a greedy corporation doesn’t want to give back. But at the end of the day, I think we got scratched up, but we battled back and we fought back against huge concessions, and it’s still one of the best contracts in the business.

According to Trementozzi, the quality of health care would not decline, and full family coverage would reach a maximum of $100 per month by the end of the contract. He also argued that the 401(k) plan that would replace defined-benefit contributions for new members would have a 100 percent match. He also pointed out that Verizon had agreed to hire 325 new full-time union employees for its contract, and that the four workers who were not going to be coming back were unlikely to win back their jobs in arbitration. In negotiations, Verizon went after pension cuts for current members, and wanted a two-tier system for health care payments as well, with new hires paying considerably more.

Trementozzi is skeptical that the union would be able to win more if the contract were to be voted down.

The problem is, if you vote “no” on this contract, what’s Plan B? Plan B is the company can impose its seven day notice, and then we would have a choice. I don’t think we’d have any other choice but to go on strike. If we went on strike it would be long and protracted, and I’m not sure if we would get anything.

An experienced technician, who is a member of CWA 1106 and the union’s liaison to Occupy Wall Street, sees things differently. In an email that has been forwarded around CWA, she argues:

I am voting “no” to the idea that our strike would be unpopular because other people pay premiums.

We cannot be afraid of public opinion; we need to shape public opinion. Did anyone think the NFL refs would look like heroes after being locked out? Who thought the Chicago Teachers Union could take on Rahm Emanuel and win? I am voting “no” because in order to turn the tide against the phenomenal gap growing wider every day between the super-rich and the rest of us, someone will have to be first [to] roll the dice, and risk everything.

It is difficult to ascertain the mood on the ground as to whether the contract will be approved, but Colloran and Trementozzi all think that it will be. Members are voting now, and the counting should be done in two weeks.

While the strike certainly won workers a better deal than if they had stayed in, many members express concern about the decision to return to work last year without a contract. But 1101 President Keith Purce argued in a letter posted on the local’s website that their conflict is with Verizon, not with the bargaining committee. Verizon’s commitment to corporate greed is indeed bile-inducing. How and in what ways one fights against it remains an open question.

Matthew Cunningham-Cook is a writer and activist in the labor movement. He has worked with AFSCME and the UAW, and has written for Labor Notes, the Public Employee Press and The Nation.

The power of example — a conversation with labor leader Joe Burns

How workers are using globalization against Walmart

What are men doing to challenge and stop gender violence?