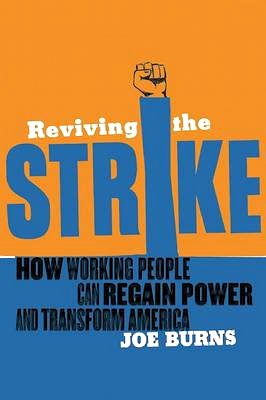 Many, if not most, in the labor movement were deeply disappointed with the results of the Wisconsin uprising, from which the anti-labor establishment has emerged almost entirely victorious. A few months after the uprising began, Joe Burns, a labor lawyer and former union president, published Reviving the Strike: How Working People Can Regain Power and Transform America, to critical acclaim. In the wake of that struggle in which strike tactics were shied away from, the book argues that the only way to reverse four decades of labor’s decline is by bringing back the militant tactics that built the labor movement to begin with — notably, industry-wide strikes with disregard for unjust labor laws.

As Waging Nonviolence’s new “Wildcat Winter” series indicates, we seem to be at the precipice of a revival like the one Burns called for. Chicago teachers struck in September, followed by nearly half a dozen teachers’ strikes in suburban Chicago, the Walmart strikes up and down the supply chain, the just-settled longshore clerks’ strike on the West Coast, and now the striking fast food workers in New York City. I talked with Joe to hear from him on this ongoing Wildcat Winter.

In the past few months, we seem to have seen an upsurge in successful strikes. What is the significance of this?

Clearly we’ve seen a change in the past couple of months in terms of strike activity increasing. In labor history, workers tend to strike in waves, because the power of example leads other workers to strike. First, with public employees and teachers, the Chicago Teachers Union went on strike. They had overall a very successful outcome. So other teachers unions have decided to strike. Second, you’ve seen other places where workers are striking to defend themselves, with very aggressive employers demanding concessions. In California, the ILWU is using a strike to defend decades of gains made by workers. The third thing — and this is a real shift — is the use of the strike as an organizing tool. That’s a big change over what has been happening over the past couple of decades. Fast food and Walmart workers are using the strike as both a tool of organizing and demanding improvements from employers.

In the past new union organizing has been seen as slowly building on one-on-one discussions, and this is really different because if you look at the history, when we’ve made real gains it’s been when we’ve shifted to a strike-based model.

How do you think the wave can be expanded?

It’s going to have to be expanded, but it’s going to be difficult because the rules of the game are so tilted in favor of employers. Employers have a lot of advantages under the system of labor law. What organizers will run up against is that we’re going to have to directly confront what I call the system of labor control — the set of labor laws that have been put into place to make it difficult to win strikes. For now organizers have been embracing this tactic, so we’ll see where it takes us.

To take a historical example: In the 1960s, millions of public workers joined trade unions, and they did it through strikes. Starting with the New York teachers, we saw this incredible strike wave, and that’s really how public workers won their unions. This was the power of example, unions refusing to obey unjust labor laws, and it was a grassroots rebellion. And, as I discuss in Reviving the Strike, it was a very similar pattern in the 1930s.

Many of these recent strikes, especially with the fast food and Walmart workers, occurred among what many theorists of labor have labeled the “precariat” — that is, people doing types of work that tend to have low job security and high turnover, and which are often part-time and subcontracted. For many years, unions avoided organizing these kinds of workers due to the difficulties of organizing such a disparate workforce. How do you see victories as possible with these new tactics?

A couple points. One is that, in a lot of industries in the 1930s, the organizational work was very precarious, and it became one of the main demands of the unions to make jobs permanent, with job security, and full-time. This was something they were able to change through struggle. If you look at longshore workers in the 1930s, you had to be called for work. Auto work was very intermittent and high-turnover. Trucking was the same thing. What unions did is they disregarded the rules that employers had set up and as a result made major gains. For the Teamsters it was a question of whether you had a union card, not whether you were an employee or contractor. That’s the key part of it — it could be changed.

If you jump forward to today, the same thing holds true. Employers are able to use their advantages under labor law to structure work in a particular fashion, and it’s the responsibility of unions to fight against this.

Could I sum that up like this: Unions need to organize work, not employees?

The Justice for Janitors campaign is the best example of this. SEIU confronted an industry that had subcontracting, and if you started to organize they would just hire another contractor. But they took the entire industry on — and that’s what you see with groups like warehouse workers and more geographic organizing of the restaurant workers in New York City — rather than the traditional shop-by-shop organizing that has been foisted upon unions by traditional labor law.

About 10 years ago, activist and scholar Dan Clawson wrote The Next Upsurge, which argued that labor movements emerge as part of broader surges. Do you see what’s happening now as potentially the precipice of the type of movements we saw among workers in the private sector in the 1930s?

I think it could be the beginning of one. Certainly the conditions are there, and there’s an understanding among unions and organizers that how they do things needs to change. That’s really been the key to the recent breakthroughs: new kinds of organizing.

We can’t push this forward, however, without confronting the system of labor control. Labor laws are so stacked in favor of employers that it doesn’t necessarily matter how creative we are, we’re always going to come up against the limits of a rigged system. If we’re going to move forward we have to figure out both the necessity and the ways of being able to violate these unjust labor laws. If we look at labor history, that was clearly a necessity both in the 1930s and the 1960s, the two greatest upsurges of the last century.

In southern Europe and in South America, arguably the two places in the “West” where the labor movement is the most vibrant, there seems to be a much greater cognizance among working people that they are locked in a struggle with capitalism. Do you think that that has to be replicated here in the United States?

Successful trade unionism necessarily requires confronting capitalism. The reason that’s the case is because effective unionism challenges the ability of capital to operate. You’re basically interfering with the sale of human labor, which is the key component of capitalism. That’s what I talk about in my book; even if we think about conservative American Federation of Labor officials of 100 years ago, their underlying philosophy of human labor as not being a commodity was actually quite radical. What’s happened over the last 60 to 70 years in the labor movement is that we’ve embraced fairly conservative ideas which allow us to have unionism but only within a framework that respects and allows the ability for capital to operate freely.

What do you think needs to come next?

It’s very hopeful that we’ve seen a turn in the labor movement back toward the strike and back toward grassroots activism and workplace-based activism. We’ve had a lot of other ideas that we’ve tried in the last 20 years, but returning to a very traditional and proven strategy is really our only hope.

Matthew Cunningham-Cook is a writer and activist in the labor movement. He has worked with AFSCME and the UAW, and has written for Labor Notes, the Public Employee Press and The Nation.

How workers are using globalization against Walmart

Swarthmore College’s rude awakening to oppression in its midst

The power of example — a conversation with labor leader Joe Burns

From marching in the streets to forming human walls of protection around protesters, veterans are playing a quiet but important role in demanding racial justice.

If we don’t have an unwavering commitment to healing as we mobilize this election season, we will always be in crisis.

Beautiful Trouble’s guide to winning the numbers game, defending democracy and challenging business as usual to build the future we deserve.

The birth of an extraordinary progressive movement

If elected, Biden will have to fix things — because we will make him

Indonesia is in the middle of a new protest wave