“Peace had been decided. But we killed right up to the deadline.”

This was what award-winning author and iconic journalist Adam Hochschild wanted me to think about when we sat down to talk about Armistice Day, which commemorates the end of World War I and is celebrated as Veterans Day in the United States. By “the deadline,” Hochschild meant 11:00 a.m. — the official moment the Nov. 11, 1918 armistice went into effect and a full five hours after the Germans had surrendered. Hochschild highlighted this fact in his 2011 book, “To End All Wars,” and still thinks Americans need to come to grips with the futility of war.

A founder of Mother Jones magazine, Hochschild is perhaps best known these days as an author of books whose characters almost always fight for justice — whether it’s the campaign against Dutch colonialism in “King Leopold’s Ghost,” the abolitionists against the British slave trade in “Bury the Chains,” the volunteers for Spain’s 1930s war against fascists in “Spain in Our Hearts,” or the activists allying with unions to fight 1920s sweatshop labor in “Rebel Cinderella.”

Hochschild is also among those veterans we salute on Veterans Day, having served in the Army Reserves during the Vietnam War. As a young progressive journalist during his Army days, he wrote for leftist publications Ramparts and Liberation, and used his last year in the reserves to organize Reservists Committee Against the War.

“Why did I join the reserves? To avoid the draft!” he explained. It was early 1964, after Hochschild graduated from Harvard. “Our presence in Vietnam was almost nonexistent at that time.” He knew that the Army wasn’t deploying the reserves overseas, the way they had in the World Wars (and would in Iraq and Afghanistan). The unit, located in Berkeley, California, had a lot of like-minded peers. “If they had tried to deploy us,” he said, “there would have been a mass exodus to Canada.”

Hochschild was already a veteran disruptor: In 1962, while still in college, he’d spent a summer in South Africa working for an anti-government newspaper, and remembers when Nelson Mandela’s supporters filled the streets of Cape Town the week their leader was captured and imprisoned. “The time I spent in South Africa then was a watershed in my life,” he wrote years later. “ Dimly, unable to assimilate it all at the time, I had the sense that summer that I was traveling back and forth across a battlefield.” Then he went home, finished college and started figuring out what to do about the draft.

In 1964, Hochschild joined the Reserves, in an administrative company near where he was living in Berkeley, California. While other reserve units trained with weapons or ammunition, “We administered ourselves! We ran a messenger service, and my section published a newsletter.” It felt strange going to monthly drills while the Bay Area and the country exploded in protest, he told me, but at least the rest of his unit felt the same way. Together they published Redline, the unit’s contribution to the era’s thriving GI press movement. “An artist friend did the logo for me, [and] we used whatever photos readers sent us.” 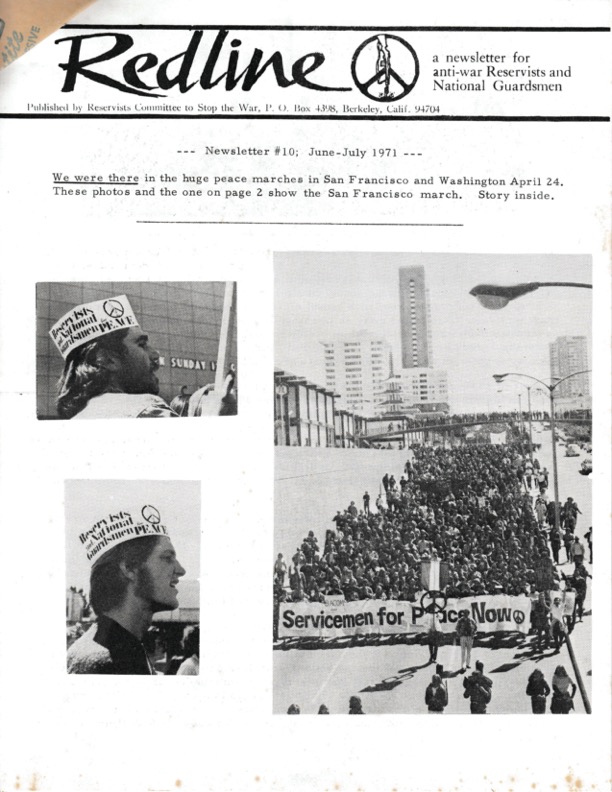 The first issue of Redline gently explained that “This newsletter is the first in a series for the more than 500 officers and men who signed the statement ‘Reservists and National Guardsmen Say No to the War.’” On the issue’s back page was a prescient warning about “announced plans to call up the reserves and guard for the next Vietnam instead of draftees.”

Covering the first-ever picketing of the annual Reserve Officers Association convention, Redline quoted its keynote: “Our business interests and our investments are world-wide. Our essential raw materials are gathered from around the world. I think that we must have, and will have, a formidable military striking power.” That quote, from Sen. John Stennis, was reprinted in Fort Bragg’s and other GI papers, part of a blossoming of hundreds of underground and subversive GI newspapers, most based at U.S. installations.

Hochschild kept up the progressive-journalist career he’d started in South Africa; he got a journalism visa from the young government of Cuba, flying to Havana on assignment to write for the nation’s premier leftist publications, Ramparts and Liberation. Improbable as such a trip might seem, his 1970 report from Havana now appears in several collections of writing about Cuba.

The trip “was remarkable,” he said softly. “My reserve unit wasn’t thrilled.” He started organizing Reservists Against the War when he was on his way out, with little to lose. The GI movement was an important ingredient in shortening the war. “It made people realize that they were not alone [opposing the war], that people inside the military felt the same.” Hochschild laughed: “It certainly upset the Army.”

At Hochschild’s next major project, Mother Jones, he was part of a 17-person collective dreaming up this new anti-establishment magazine. In 1983, he made sure to cover what felt like the next potential U.S. war, this time in El Salvador. “It was kind of harrowing talking to people whose families had been killed,” he said. It was his first direct reporting about torture.

“We had access to everyone, including the prisons,” Hochschild added. “They likely calculated that Americans wouldn’t care, and they were right.” Over and over, he has doubted that Americans could care about wars when there’s no draft, and they are fought by a caste separate from anyone in power.

Hochschild sees his books as “finding the heroes,” to guide us through narratives that describe horrors. Thus “Bury the Chains” isn’t about slavery, it’s about William Wilberforce and Thomas Clarkson fighting to end the slave trade in Britain. “It’s the story of a victory! There’s still inequality in the United Kingdom to be sure, but my story is about these brilliant organizers,” whose effort was bolstered by massive slave revolts in the British West Indies. Hochschild thus got to narrate a theatrical climax, “a moment at Parliament when you knew: This is gonna happen.”

There’s a similar shape in Hochschild’s iconic “King Leopold’s Ghost.”  Belgium’s occupation of the Congo was just beginning to be exposed, he told me, and “I was startled to learn the death toll — millions.” Let alone the slave-labor system Congolese suffered under, one that provoked a movement to stop it. Hochschild’s heroes include shipping-company whistleblower Edmund Dene Morel, Black American journalist George Washington Williams and Roger Casement, an Irish member of the British consular service. Besides, as Hochschild added, “This story was a writer’s dream! It had a villain!” King Leopold had persuaded the world he was a philanthropist, until “activists succeeded in putting it on the front pages.”

It didn’t stay there, of course; the memory of King Leopold’s horrors faded. One reason, Hochschild explained, was that, during World War I, “Belgium became a victim.” A lot of pro-war propaganda was about fighting to save violated Belgium, and “it was not convenient to remember what Belgium had also done.” 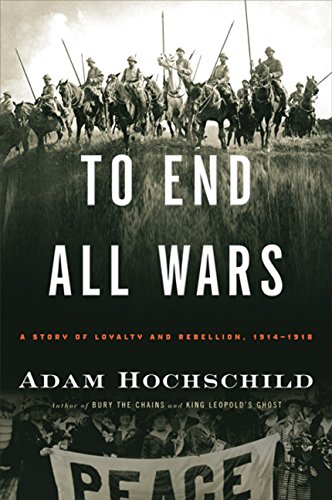 The First World War is, of course, the subject of “To End All Wars,” the book that sparked our conversation. “World War I has always fascinated me,” Hochschild said. “So much strife, in all these countries — and yet there were brave minorities of people who saw war for what it was.” Six thousand young men refused conscription, refusing even alternative service. “It was a brave and fascinating collection of people. Besides, I love writing about the British — they’re so colorful!”

In that 2011 book, Hochschild describes how the war divided families — some volunteering to fight in it, others organizing against it. Talking about Armistice Day, Hochschild sounded like one of the latter. He still finds it unconscionable: Though World War I officially ended on November 11, 1918, at 11 a.m.,  the body count that day shows 2,798 deaths on both sides, between the signing of the peace treaty and the official beginning of the armistice. “Peace had been decided. But we killed right up to the deadline.”

Hochschild has returned to the era for his newest project “American Midnight,” a book about political repression in the United States from 1917-1921. In addition to the administration of President Woodrow Wilson — with its 1917 Espionage Act and the even more punishing 1918 Sedition Act — Hochschild calls attention to a wave of right-wing terrorism that acted as enforcers, especially the militaristic American Protective League (that era’s version of the Oath Keepers) and a resurgent Ku Klux Klan. “When Jan. 6 happened,” Hochschild said, “I wanted to get [the word] out about its precursor.” “American Midnight” is scheduled for publication in October 2022.

Since Armistice Day is now usually called Veterans Day in the United States (declared so in 1954 to include veterans of subsequent wars), I asked Hochschild what military veterans say to him about “To End All Wars.” “I hear a lot from children and grandchildren of World War soldiers,” he said. “Not so much from veterans,” adding that some more leftist veterans have responded strongly to “Spain in Our Hearts,” his book about American involvement in the Spanish Civil War of the 1930s.

“I was fascinated by the 2,800 Americans who went to Spain and were later harassed by the FBI,” Hochschild said. During his years as a Vietnam-era activist he recalled “seeing some of them cheered at antiwar demonstrations.”

When asked if we have that kind of international solidarity now, Hochschild said, “I think we do on climate,” referring to the protests taking place in Glasgow, around the UN climate talks.

He’s had other reasons to feel heartened as well, noting a recent trip to the Congo, where he met with a young Congolese activist from the civil society movement called Lutte pour le Changement (Fight for Change), or simply LUCHA. “It was deeply moving to hear him talk about [nonviolent action theorist] Gene Sharp’s influence on their work, and how inspired he was by the peaceful movements that had brought about change in Serbia, Georgia and elsewhere.” Sometimes, Hochschild noted, “good ideas can cross national borders. I think some of us don’t realize how much of an international consciousness already exists.”

Chris Lombardi is the author of "I Ain’t Marching Anymore: Dissenters, Deserters and Objectors to America’s Wars." Her work has appeared in The Nation, Guernica the Philadelphia Inquirer.

Meet the organizer who pulled off the Gap Does More hoax