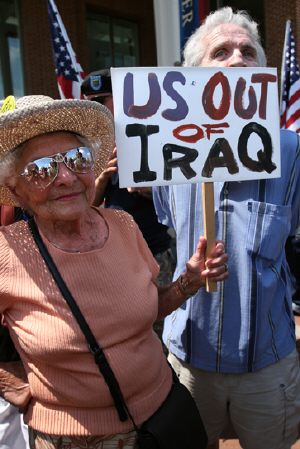 According to the online “Antiterrorism and Force Protection Level 1 Annual Refresher Training” course that all Department of Defense employees are required to take, protests should be considered a form of  “low-level terrorism.”

Which of the following is an example of low-level terrorism activity?

Select the correct answer and then click Check Your Answer.

To proceed with the exam, the correct circle must be checked: Protests.

An actual copy of question obtained by the ACLU can be found on the last page of this pdf.

Equating nonviolent action with terrorism is nothing new, as anyone involved in the peace movement knows. According to a letter that the ACLU sent to Gail McGinn, Acting Under-Secretary of Defense for Personnel and Readiness:

Examples of this shameful pattern can be seen in the Pentagon’s monitoring of at least 186 anti-military protests, the FBI’s surveillance of potential protesters at the Republican National Convention, the Fresno County Sheriff Anti-Terrorism Unit’s infiltration and surveillance of Peace Fresno, a community peace and social justice organization and the covert surveillance by the Maryland State Police of local peace and anti-death penalty groups.

Going back even further, there was also of course J. Edgar Hoover’s notorious COINTELPRO that ran from 1956 to 1971, and the Pentagon’s Talon program, which was supposedly shut down in 2007, after it was revealed (again by the ACLU) that data had been collected on peaceful protesters.