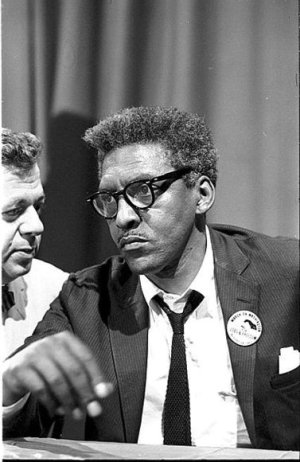 In a provocatively-titled essay at Killing the Buddha today—”Gays Are the New Niggers“—Rev. Osagyefo Uhuru Sekou calls on the memory of Bayard Rustin. More than anyone, perhaps, Rustin is responsible for bringing Gandhian nonviolence to the civil rights movement in the American South. He was an officer in the Fellowship of Reconciliation, a war resister, a close advisor to Martin Luther King, Jr., and a key organizer of the 1963 march on Washington, D.C. He was also a gay man, a fact that landed him in jail, drove a wedge between him and other movement leaders, and made him the target of diatribes by Strom Thurmond on the floor of the U.S. Senate.

For Rustin, gay rights was inextricably part of the larger struggle for civil rights. This weekend marks the 40th anniversary of the Stonewall riots in New York City, which helped to launch the modern gay rights movement. In an essay of Rustin’s which Sekou quotes, “From Montgomery to Stonewall,” he insists on the continuity between the two causes:

That was the beginning of an extraordinary revolution, similar to the Montgomery Bus Boycott in that it was not expected that anything extraordinary would occur. As in the case of the women who left the Russian factory, and in the case of Rosa Parks who sat down in the white part of the bus, something began to happen, people began to protest. They began to fight for the right to live in dignity, the right essentially to be one’s self in every respect, and the right to be protected under law. In other words, people began to fight for their human rights. Gay people must continue this protest.

Rustin’s legacy, which was often hidden in order to protect the civil rights movement from homophobic distractions, has been profoundly underappreciated. We can only hope that today, finally, we are arriving at a place where his tremendous contribution can be appreciated for what it was and his call can be heard. Sekou concludes:

All niggers—historical and contemporary—must join forces to achieve freedom for all. Rustin places a moral challenge on those in the struggle: “Every indifference to prejudice is suicide because, if I don’t fight all bigotry, bigotry itself will be strengthened and, sooner or later, it will return on me.”