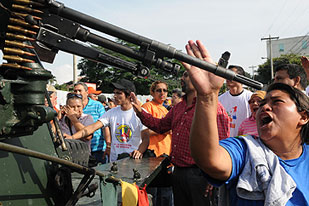 In what is the first major political crisis to hit Central America in years, Honduras has seen its democratically elected president Manuel Zeleya overthrown in a coup d’etat by the military. The event comes just as the people of Honduras were set to vote on a change to the constitution that would allow presidents to seek re-election beyond a single four year term.

Not surprisingly–when it comes to such headlines–accusatory eyes are beginning to look toward the US. While President Obama and Secretary of State Hillary Clinton have expressed support for Zeleya’s return to power, it is impossible, as Jeremy Scahill noted, “to imagine that the US was not aware that the coup was in the works.”

The coup plotters/supporters in the Honduran Congress are supporters of the “free trade agreements” Washington has imposed on the region. The coup leaders view their actions, in part, as a rejection of Hugo Chavez’s influence in Honduras and with Zelaya and an embrace of the United States and Washington’s “vision” for the region. Obama and the US military could likely have halted this coup with a simple series of phone calls.

There are other factors to consider as well, such as the large US military presence in Honduras and the training of Honduran military leaders at the US Army School of the Americas. There are sure to be more ties uncovered in the following days.

In the meantime, popular resistance is beginning to mount. Despite a curfew imposed by the interim president, pro-Zeleya demonstrators held a vigil by the presidential palace in Tegucigalpa before police fired tear gas to disperse the crowds. Media outlets have either shut down or aren’t reporting news and the internet is down in the capitol city.

Zeleya’s presidency minister Enrique Flores Lanza announced that the cabinet is launching a campaign of “peaceful civil resistance” to bring Zelaya back to office.

“We are making a call and talking with patriotic leaders in Honduras, because we will begin a peaceful civil resistance in whole country,” said the minister.

“People of the country are demonstrating to oppose the attack on democracy,” he said.

Meanwhile, here in New York, I’ve received word of an “Emergency rally in support of Honduras” set to take place in front of the Honduran Mission to the United Nations between 3pm and 6pm today.

I expect more news on protests to filter in later.

How communities in El Salvador are organizing to block mining projects

To organize anyone (and maybe fall in love), do this

Protests beginning to form in wake of Honduran military coup