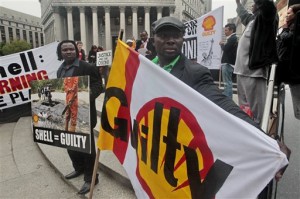 A surprising end came to the lawsuit implicating Royal Dutch Shell in the murders of environmentalist Ken Saro-Wiwa and six other civilians by the former Nigerian military regime: Shell agreed to a $15.5 million settlement.

I say surprising not just because Shell gave in, but more so because it seems like Shell got off too easy. By agreeing to the settlement they avoided having to acknowledge any wrongdoing.

Not that Shell could ever come off looking like the good guys, but passing on their day in court allowed Shell Executive Director Malcolm Brinded to spin a positive PR statement in which he said, “This gesture also acknowledges that, even though Shell had no part in the violence that took place, the plaintiffs and others have suffered.”

Furthermore, as Chris Kahn of the Associated Press noted:

“Altogether, the settlement will have a negligible affect on Shell’s shareholders, amounting to less than one-hundredth of a percent of Shell’s annual revenue. It’s comparable to the annual cost of renting one of the supertankers that Shell uses to deliver Nigerian oil to other countries.”

Even so, the plaintiffs, which include Wiwa’s son and other relatives of the deceased, are calling it a victory. And I won’t begrudge them that. They helped pave the way for other transnational companies owned or operated in the US to be held responsible for human rights abuses committed abroad.

About half of the money will go toward setting up a trust fund that according to the AP “will invest in social programs in the country, including educational endowments, agricultural development, support for small enterprise and adult literacy programs.” The rest will compensate the families and pay off years of legal fees.

The families and the lawyers from the Center for Constitutional Rights have been through a lot since they initiated the lawsuit in 1996. So the victory, as they see it, is well deserved–as is the lawsuit’s landmark status. But I can’t help but wonder what would have come from a trial, since Shell seemed eager enough to avoid it.