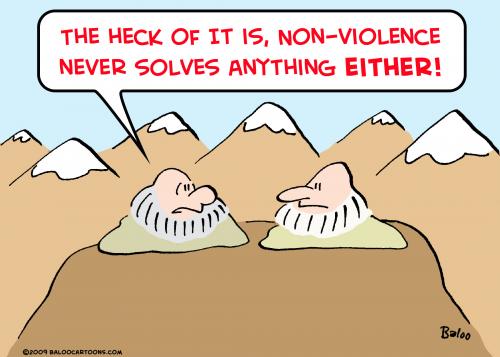 I just stumbled across this cartoon. And everything about it confuses me. I sort of feel like Elaine in that episode of Seinfeld where she drives herself crazy trying to understand the meaning of a New Yorker cartoon, only to later find out from the editor that he didn’t understand it either—the joke being that the New Yorker gets away with printing nonsense because everyone just assumes it’s over their head.

Well, this cartoon has that same New Yorker smarter-than-thou quality to it, with text that almost seems like it was thought up by someone other than the artist. Except, instead of soliciting readers, the artist went straight to the guy who writes Ziggy and asked him to slap some depressingly ironic text on it.

My friend Jason, who illustrates his own great web comic, speculated that the two amorphous bearded blobs are supposed to be philosophers, wise men or perhaps even gods on Mount Olympus and they’re essentially riffing on the old adage that “violence never solves anything.” Except, they’re taking it one step further and essentially saying nothing works.

Well, of course that’s not true. Aside from the scores of historical case studies showing the effectiveness of nonviolence (against everything from the Nazis to murderous dictatorships), there are countless smaller efforts taking place every day, which we try to mention on this blog.

While I don’t think the artist’s intention was to knock non-violence per-se (although he does seem to have a history of doing so), it’s the de facto acceptance of defeatism this comic seeks to elicit that bothers me most. That’s not to say we can’t take or even make a joke about nonviolence.

Another friend reminded me of a story Dan Berrigan tells about getting stuck in an elevator at some courthouse for a hearing on one of his many civil disobedience actions. Amidst the stalled crowd of prosecutors and other government workers unfriendly to his actions, he joked, “We’re used to going nowhere.”

That being said, I still don’t think I entirely get what’s going on in this comic. Jason, who seemed to have come as close to understanding it as anyone I’ve asked, offered up one other possibility that I like a lot more: “Maybe they’ve been cut in half as a result of their original violent approach to ‘solving things’, and now they can’t get their nonviolent approach to work either because they got no arms and legs to move around with!”

Lessons from the LGBT equality movement

Vision is finally on the rise in U.S. politics

What to make of this strange cartoon?