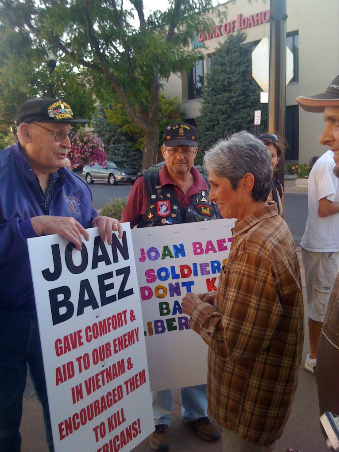 Outside a Joan Baez concert a couple nights ago in Idaho Falls, four Vietnam veterans  protested the show with signs reading: “JOAN BAEZ – SOLDIERS DON’T KILL BABIES, LIBERALS DO” and “JOAN BAEZ GAVE COMFORT & AID TO OUR ENEMY IN VIETNAM & ENCOURAGED THEM TO KILL AMERICANS!”

Rather than ignore the protest, which would have been the easiest thing to do, or get into a nasty argument with the men about their signs, Baez choose to engage them in an exemplary nonviolent fashion. According to Daily Kos:

Joan was informed that the men were protesting her concert about an hour before it was due to begin and she immediately walked out onto the street to talk to them.  When she approached, one of the first things they said was “We appreciate the work you did on civil rights and women’s rights.”  They wanted to make that point clear.

She listened closely as they discussed their views.  Primarily, they wanted to express the way they felt betrayed by anti-war protesters when they returned from combat.  Joan assured them that she stood by them then and now.  They had mixed reactions as she explained her actual positions and her support for all veterans, across the board.

The protesters at first were hardened in their position, and it sounds like at different points the conversations did get quite tense. However, Baez’s calm, nonviolent approach to the conflict had an effect: 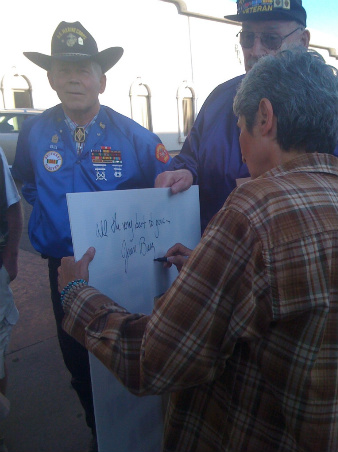 …Joan’s continuing acceptance of their stories and her willingness to hear them out began to melt their anger.  In a twist that seems hard to fathom, they then asked her to SIGN THEIR POSTERS!  She replied that she would sign the back but not the front of “those horrible things.”  Incredibly, the man with the baby-killing sign replied that he would take her name off the poster if she would sign it.

She did end up signing them, and also getting copies of her book for each of them, and offering tickets to the show, which they did not accept.  She signed the back of the poster about her encouraging the killing of American soldiers – “All the very best to you, Joan Baez.”

During the concert afterwards Joan dedicated a song to the protesters and said “You know, they just wanted to be heard.  Everyone wants to be heard. I feel like I made four new friends tonight.”

While I don’t know anywhere near as much about Baez as I would like, she seems to really embody nonviolence and understand what it’s all about. Her approach to this potentially ugly situation is something that we should all take note of, especially as the right wing steps up its protest against health care reform and government action on climate change.  It can be extremely difficult and won’t always work, but love, respect and a sincere openness to engage the opponent in conversation is the only way we will ever be able to win over those we disagree with.

To read a wonderful and humorous story that Baez wrote about nonviolence, click here.

A third way in Syria