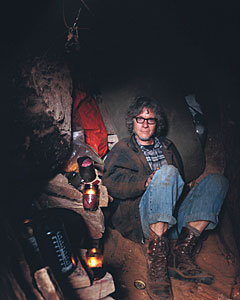 “I believe that banking institutions are more dangerous to our liberties than standing armies.”

“History records that the money changers have used every form of abuse, intrigue, deceit, and violent means possible to maintain their control over governments by controlling money and its issuance.”

For 9 years, Daniel Suelo has lived without using money.  Dwelling in a cave outside the desert town of Moab, Utah, Suelo (as he likes to be called) has chosen to live a life beyond the bounds of commercial civilization, seeking to embody what he refers to as a moneyless “Gift Economy,” one which he believes is exhibited already in Nature.

On his website Living Without Money, which he maintains at a public library in town, Suelo notes:

All creatures, all the universe, outside the walls of commercial civilization live moneyless. That’s why nature outside civilization’s constricts, is perfectly balanced. Yet no nation on earth, even with its PhD economists, can even balance its budget.

As I perused the recent article about Suelo published in Details Magazine, I could not help but feel a profound sense of respect and admiration for him, for he comes off not as an angry, radical pariah fueled by bitterness or self-righteous indignation, but rather a peaceful and gentle spiritual pilgrim seeking to tread a genuine path of Truth.

But when I shared the gist of the article with my friend’s father, the mere thought of a man living without money generated a dismissive and mocking retort, “He is selfish. What does he do? Nothing for anyone. All he is doing is mooching off of others.”

I cringed inwardly, wanting to come to Suelo’s defense, yet not wanting to be preachy or confrontational.  The only words that occupied my headspace were not my own, they were those of Jesus.  “If you wish to be complete, go and sell your possessions and give to the poor, and you shall have treasure in heaven; and come, follow Me.” “You can not serve God and mammon.”

Since the day I came across these words, I have been struggling with the fear they provoke inside of me.  The fear is not so much of the hardships imposed by poverty, but more from the hypocrisy I may embody in failing to heed my Master’s call.  A big part of me believes that if I don’t sell my possessions that I can not truly be a disciple of Jesus and that I could not in good faith call myself his follower.

Many say that these words were an attempt by Jesus to generate an understanding of detachment and internal renunciation in the heart of his listeners. Granted. Yet what if he was also getting at something deeper? What if by calling us to empty our pockets He was trying to teach us one of God’s most intimate lessons in the art of loving? What if the only way we could realize genuine grace and mutual interdependence was by depending on the provision and sovereignty of the Creator?

I became silent and hoped the discussion would change course, yet inside I steamed at the unloving and disrespectful tone with which my family friend immediately derided a complete stranger’s life path.  Yet his response is to be expected given the insight of Democrat Presidential candidate William Jennings Bryan who reminds us, “The money power denounces, as public enemies, all who question its methods or throw light upon its crimes.”

Suelo, who claims to now possess a peace and joy that escaped him during his days amongst the monied, is not seeking to create a new alternative to the money system; he is incarnating it. His faith is in Love, in natural balance and selection, and his goal is grace. He only takes what is freely given and does not accept money.

I can not do justice to the man’s philosophy or rationale, you deserve to hear it from the source.  Keep track of his wanderings and ruminations at his blog which he also maintains at the library.  Maybe he is totally crazy. But what if he is right?  Can we set aside our prejudices, our materialism, our attachments and our preconceived notions long enough to hear him out?

Jesus also said we could not serve God and mammon (money). Either we love one and hate the other or vice versa.  That means we either work for God or we work for money.  The two don’t mix. Maybe he was crazy too.  Then again, maybe not.

The Peace of the Penniless