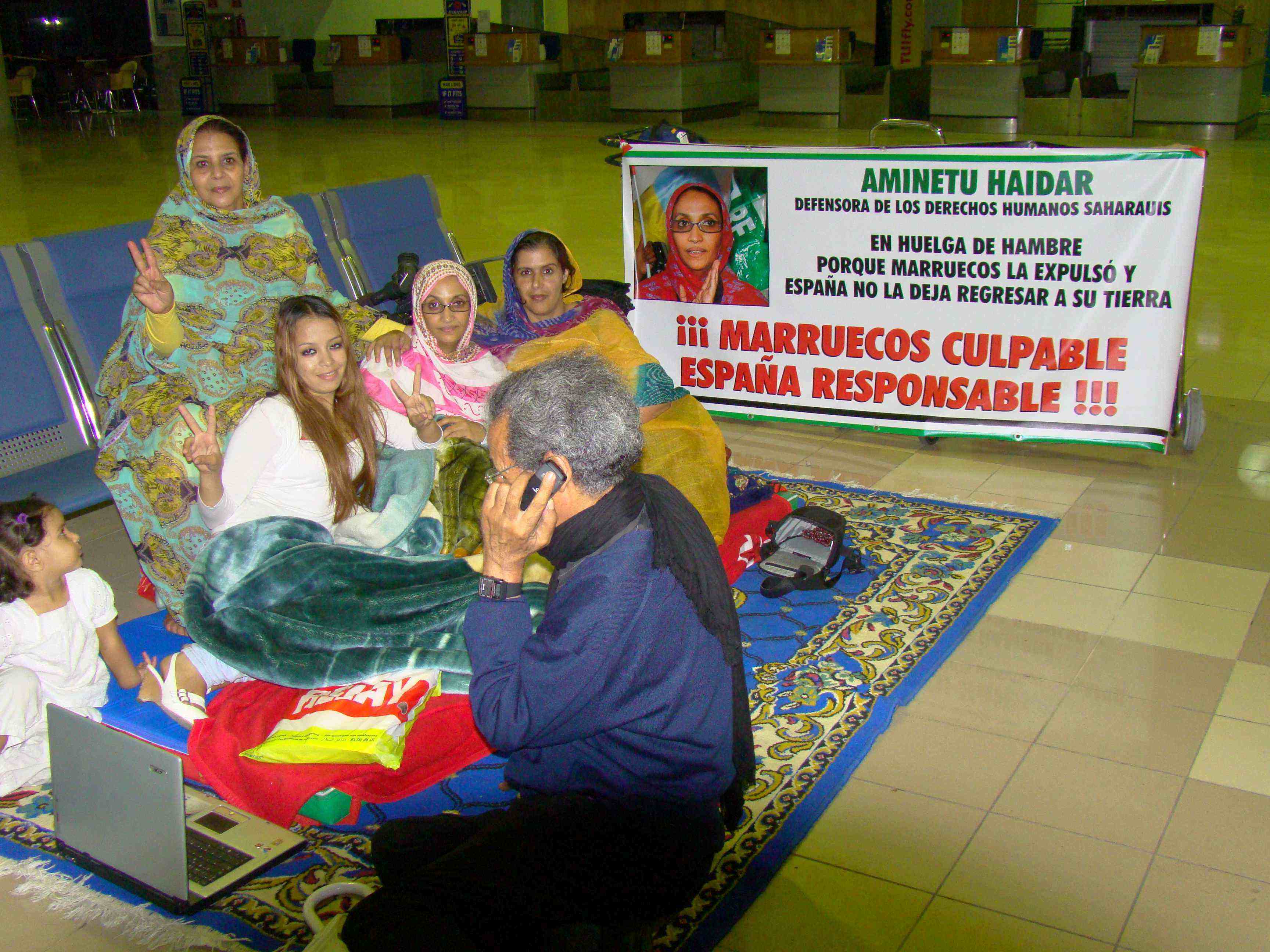 SPAIN – The Saharawi non-violent activist Aminatou Haidar, who is also known as the Saharawi people’s Gandhi and was recognized with the Robert F. Kennedy Human Rights Award in 2008, remains on a hunger strike – which she began on Sunday – at the Lanzarote airport in Spain after Morocco expelled her by force from the Western Sahara Occupied Territories last Saturday. The story has been reported by human rights organizations, the Spanish police, Communicators for Peace and the Saharawi Journalist and Writers Union (UPES).

Despite the fact that doctors are worried about her health – since she suffers a stomach ulcer – Haidar assures that she is not going to abandon her demonstration until the Spanish Government allows her to take a flight to return to her home in the capital of the Saharawi Territories, El Aaiun, which has been occupied by Morocco since 1975,  in violation of United Nations resolutions and international law.

Haidar states that she feels kidnapped in the Lanzarote Airport and denounces how the Spanish government has cooperated with Morocco to keep her out of Western Sahara. Moroccan authorities took her passport and all her documentation. Subsequently, Spain accepted her entrance to the country without any documents.

Haidar told the captain of the aircraft that she was forced to take the flight and she did not want to go to Spain, but to Western Sahara – one of the last African colonies according United Nations resolutions. Currently, the Spanish government forbids her to take any flight to Western Sahara or to other airports where she could get access to other flights to come back home.

Morocco deported Aminatou Haidar to Lanzarote after the police tried to force her to sign a document admitting that Western Sahara is a Moroccan territory. Haidar refused to sign and argued that Western Sahara is a territory under the custody of the  United Nations, that is waiting for a decolonization process. United Nations resolutions and international law back up the Saharawi activist, but Morocco considered her refusal to sign enough reason to deport her without any argument or judicial guarantee.

Now, Haidar is sleeping on the street in front of the airport because the Spanish police forbid her to sleep at night inside the airport. Haidar is being supported at the airport by Saharawi and Spanish organizations and pacifists. Next to her, the Saharawi journalist Man Chagaf is backing her and helped us to translate a short interview with Haidar, which could not be longer due to her health problems.

Journalist: When is your hunger strike going to end?

Journalist: Do you believe that the non-violent struggle is going to have any result? What would you say to the Saharawi population that is suffering from exile and the occupation?

Haidar: I am very grateful for all the kindness and affectionate signs. I am receiving calls and messages from all over the world. I believe firmly that the Saharawi peaceful struggle is a fair cause and, as Gandhi did, I have absolute faith in nonviolence for a better world and for real peace.

Nacho Martín is a reporter for the Spanish newspaper Levante-EMV and an analyst for The Institute for the Study of Conflict and Humanitarian Action in Madrid. He is also Executive Manager of Communicators for Peace, with experience on nonviolent actions, reporting and communication for peace projects in Western Sahara, Palestine, Mexico and Spain.

As press freedom shrinks in Kazakhstan, journalists are standing up for civil liberties