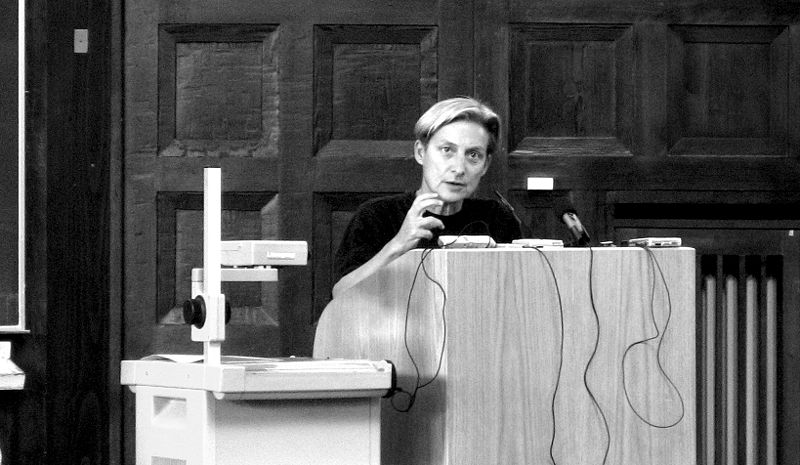 I began my recent dip into Slavoj Zizek’s Violence with a question that he raises but never quite answers: “How can one wholly repudiate violence when struggle and aggression are part of life?” What he offers, instead, is an analysis of the violence that goes unacknowledged simply because we are so accustomed to it, because it is woven into the systemic order of society’s power relationships. But the crucial importance of this question to those of us invested in the theory and practice of nonviolence—forced to notice that it threatens to undermine our entire enterprise—kept me looking for other texts to help me think through it. At the end of that post, I promised a turn to Judith Butler’s Frames of War, which is what I’ll do now.

Butler is, says Cornel West on the dustjacket, “the most creative and courageous social theorist writing today.” A professor of comparative literature at Berkeley, she has played a defining role in the poststructural analysis of gender and sexuality, bringing Hegel, Nietzsche, Levinas, and others to bear on the foundational questions of human identity. I quote West most of all because I’ve mainly encountered Butler on panels alongside him, and their remarkable repartee has conditioned some of the most riveting intellectual experiences of my life. West plays the prophet and Butler the meticulous artificer, whose inventions tread along subtle gears to astonishing results. Together, they give me hope that the disciplined imagination still has something to say to our ever-more technocratic way of doing politics.

Frames of War is a series of essays on the horrific violence of US power during the last Bush administration. The book’s subtitle is When Is Life Grievable?, and it points to the heart of Butler’s argument: the senselessness of this violence stems from an inability (or unwillingness) to grieve for the human beings who fall victim to our weapons. Implicitly, we don’t even seem to consider those people really alive. She calls for “a new bodily ontology” (Butler’s prose is infamously technical) that allows us to recognize how intertwined we are with them. Other human beings are inevitably woven into, as she puts it, the conditions that make life livable for us, and consequently we have obligations to them. Grief would be a start.

What suggested to me the relevance of this text to the issue at hand was the discovery, while perusing it in Bluestockings bookstore, of the problem that orients its final chapter, titled “The Claim of Non-Violence.” It is a restatement of Zizek’s unanswered question:

I was asked by the philosopher Catherine Mills to consider an apparent paradox. Mills points out that there is a violence through which the subject is formed, and that the norms that found the subject are by definition violent. She asks how, then, if this is the case, I can make a call for non-violence.

This dilemma is especially pressing in terms of the analysis of human identity that Butler has explicated over the course of her career. She sees identity as being constituted in and through relationships—many of which we did not choose—with others. There is inevitably a violence in that. I, for instance, am a US citizen very much because my ancestors experienced violent persecution in the countries they came from. That fact of citizenship rests on a legacy of violence, just as readily as it rests on the willingness of other people to recognize today that I am a citizen—a willingness supposedly ensured by my country’s vast military. Such citizenship is not intrinsic to my being; it depends on social arrangements, many of which, in turn, depend on violence. What difference, then, does that claim to citizenship—or any identity I might assert—have with claiming a right to act violently in the present? To put it another way: how can I be nonviolent while still being myself?

Butler’s answer to Mills begins by reminding us that identity formation doesn’t happen only at the beginning. It continues, again and again, through a process of “iteration.” I remain a US citizen because I continue to allow myself to be one. Similarly, and constantly, I am faced with choices that, in themselves, allow me to choose between violence and nonviolence, irrespective of the violence that might have preceded them. She phrases the ongoing dilemma this way: “How do I live the violence of my formation?”

In describing this process, she follows Gandhi’s affirmation—his insistence—that nonviolence is a struggle, not mere passivity. Nonviolence is not simply an absence of justice; Butler phrases it, helpfully, as a claim or a demand that is made upon us—much in the way justice has been understood, from the cries of the Hebrew prophets to the modern courtroom, as a complaint raised by victims of injustice and their spokespeople. Nonviolence has to phrase this claim more perfectly than violence, since it only works if the unjust party hears and is moved. Effective nonviolent action amounts to a “carefully crafted ‘f[**]k you,'” she writes.

Butler departs from Gandhi, however, on just what kind of struggle nonviolence should call us to make, and on how we should think about it. Advocates of nonviolence have long wrestled with how to explain what they do without resorting to negation. Gandhi called his method not the traditional Sanskrit term ahimsa (literally, that which arises in the absence of violence), but satyagraha—truth force. “Truth” was the vital substance in Gandhi’s philosophy, which the struggle for justice must always seek to uphold. One must not kill the enemy because there is truth even in him. Truth meant, for Gandhi, no less than God.

A category like “truth” doesn’t hold the same cache in Butler’s mind, since she understands it to be so profoundly contingent on social relations, on language, and on power. Instead, she looks to the social relations themselves and finds in them—in precisely the profundity of our dependence on them—a call to responsibility not to do violence to one another. “I’m not sure non-violence saves the purity of anyone’s soul,” she writes, evoking a motif of Gandhian spirituality, “but it does avow a social bond.” What calls Butler to nonviolence, thus, is even more basic than truth; it is the very relationships through which truths come to be known.

Butler implies, in the same short final chapter, an additional departure from the Gandhian vision. For decades, feminist philosophers have critiqued the kind of total self-sacrifice so readily demanded by canonical theories of ethics. They speak from the experience of women, for whom self-emptying has traditionally been the default way of life. It is an expectation that they recognize all too well as inviting one’s own victimization. There are few better examples of this demand—what Butler calls “moral sadism”—than Gandhi. (Just ask his wife, a woman who suffered much for his principles without always choosing to do so.) With fasting, beatings, and imprisonment, he invited the violence of the British onto himself and seemed to revel in enduring it. Butler chooses “responsibility” over such total self-emptying; keep the self intact, and through it, glimpse one’s responsibility to act nonviolently toward one’s fellow human beings.

Still, as an active, positive formulation of nonviolence as struggle, and despite these differences, Butler’s approach is fundamentally in line with Gandhi’s.

I should nevertheless note my misgivings about how sufficient it is, ultimately. The social relations that Butler points to seem simply too fluid and too unequal, to provide the basis for nonviolent action oriented toward a truly egalitarian kind of justice. We depend on each other in profoundly unequal ways. This is why, one might argue, US troops went to Iraq in 2003 and not, say, Rwanda in 1994. I find her analysis particularly unsatisfying in the account of reproductive rights (in the book’s introduction), which seem to me even less plausible in her system than in more familiar approaches. Perhaps what she proposes would do well to be combined with Zizek’s reminders in Violence about the systemic violence of apparently peaceful society. Then again, given her past work, I highly doubt Judith Butler needs to be reminded about the violence inscribed in ordinary social relationships. We shouldn’t be surprised that a 20-page chapter about nonviolence falls short of exhaustive.

The account of nonviolence in Frames of War is, if nothing else, a welcome encounter between the rarefied world of social theory and the discourse of active nonviolence stemming from Gandhi. What has always impressed me about Butler is how she orients her thought so that it speaks to the pressing needs of activists. Her call for nonviolence now is a telling reminder of how urgently we must find alternatives to the violence of this century’s first decade, now coming to an ominous close.

8 ways to defend against terror nonviolently

The government shutdown — an anarchist dream?