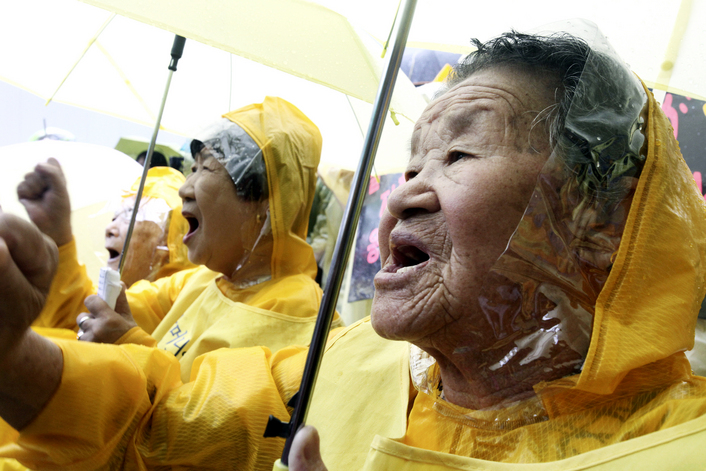 Every Wednesday since 1992, a group of South Korean former World War II sex slaves and their supporters gather outside the Japanese embassy in Seoul to demand compensation and an official apology from Japan, which ran a system of military brothels before its surrender in 1945. At yesterday’s gathering, many people carried signs with the number 900, signifying the landmark number of protests these so-called “comfort women” and their supporters have staged over the last 17 years.

According to an LA Times article that ran back in April:

Japan’s response has been mixed. After the war, the government maintained that military brothels had been run by private contractors. But in 1993, it officially acknowledged the Imperial Army’s role in establishing so-called comfort stations.

Conservatives in the political establishment still insist there is no documentary evidence that the army conducted an organized campaign of sexual slavery — a contention challenged by many researchers.

Only about 93 confirmed “comfort women” are still alive. Back in the early 90’s when activists first brought light to the issue by seeking out survivors, only 234 came forward. Many were too embarrassed, while others were likely lost to mental illness and disease. But the ones who remain and show up to the protests, have been described as “part Golden Girls, part adamant activists.”

A number of them live together in a home established by Buddhist organizations and philanthropists. They are cared for by a staff, as well as each other. The Japanese government has offered to set up a fund, but the women have refused it. They prefer that the government accept full responsibility for their suffering.

Although many may not live long enough to hear such an official apology, their example of steadfast protest should be a reminder that nonviolence isn’t always about results. Sometimes it is about speaking the truth, consistently and tirelessly without worry of effectiveness.

Even so, few would dare say these feisty old women, most well into their 80’s, haven’t had some effect. After all, organizations have formed to help them, international press are writing about them and even the US Congress has called on Japan to apologize and “accept historical responsibility” for the sex slavery.

At yesterday’s rally, one of the organizers shouted, “There should not be a 1000th weekly protest.” It seemed to come with the tacit understanding that there almost certainly will be, if necessary.