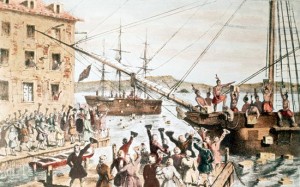 What’s the most influential social movement in the United States today? When was the last time we heard, for instance, from ol’ Chairman Avakian’s Revolutionary Communist Party? And the Internet magic made for the Democrats’ 2008 electoral campaigns seems to have settled comfortably back into the self-satisfaction of recycling latte cups. Today, with health care, robber-baron big banks, and two disastrous wars in the balance, the people taking to the streets and capturing the media’s gaze are the so-called Tea Partiers, calling for an end to social services and a return to the joyful jingoism we felt the day after 9/11. Just the other day, they helped ensure the victory of Republican Scott Brown in the Massachusetts Senate race, perhaps dooming the chances of the Democrats’ health care plan.

In the February 1st issue of The New Yorker, Ben McGrath gives a truly carpetbagging account of middle American Tea Partiers in action. Here’s one of many striking passages:

[Keli Carender, a.k.a. the Liberty Belle] identified a tactic that would prove invaluable in the months of raucous town-hall meetings and demonstrations to follow: adopting the idealistic energy of liberal college students. “Unlike the melodramatic lefties, I do not want to get arrested,” she wrote. “I do, however, want to take a page from their playbook and be loud, obnoxious, and in their faces.”

McGrath also reminds us that this isn’t coming out of nowhere:

American history is dotted with moments like this, when, as the Princeton historian Sean Wilentz says, “panic and vitriol come to the fore,” occasioning a temporary realignment of political interests. [Pornographer Larry] Flynt cited Franklin Roosevelt’s use of the phrase “economic royalists,” which was itself an echo of the moneyed interests targeted by Andrew Jackson, who earned the nickname King Mob after his Inauguration, in 1829, brought hordes of precursors of the Hustler subscribers and WrestleMania fans of our time to the White House lawn. Jackson’s staunch opposition to the Second Bank of the United States set a precedent for generations of Wall Street resentment to come.

There are even trace echoes of the sixties:

One historical comparison that some Tea Party champions have made is to the civil-rights movement, and, to the extent that the analogy holds, it may reflect the fact that the Tea Party seems to derive much of its energy from the members of that generation who did not participate in the cultural revolution of the sixties, and are only belatedly coming to terms with social and demographic trends set in motion fifty years ago.

The article’s most important contribution is its refutation of the claim that the Tea Party protests can be dismissed as an artificial uprising engineered by cynical lobbyists in Washington:

“Astroturfing” is the critics’ preferred term for this phenomenon, with its imputation of a synthetic, top-down structure to contrast with the outward appearance of grassroots independence. Yet the presence of paid FreedomWorks operatives at meetings like the one in Cicero, handing out Obamacare Translator leaflets and legislator “leave-behinds,” would be cause for greater skepticism if the civilians in attendance weren’t already compiling binders of their own and reciting from memory the troublesome implications buried on page 59 of House Resolution 3200. The blogosphere can make trained foot soldiers of us all, with or without corporate funding.

Lest we mistake the movement’s scruples for fundamentally nonviolent:

An online video game, designed recently by libertarians in Brooklyn, called “2011: Obama’s Coup Fails” imagines a scenario in which the Democrats lose seventeen of nineteen seats in the Senate and a hundred and seventy-eight in the House during the midterm elections, prompting the President to dissolve the Constitution and implement an emergency North American People’s Union, with help from Mexico’s Felipe Calderón, Canada’s Stephen Harper, and various civilian defense troops with names like the Black Tigers, the International Service Union Empire, and CORNY, or the Congress of Rejected and Neglected Youth. Lou Dobbs has gone missing, Glenn Beck and Rush Limbaugh turn up dead at a FEMA concentration camp, and you, a lone militiaman in a police state where private gun ownership has been outlawed, are charged with defeating the enemies of patriotism, one county at a time.

This is, as McGrath points out, an orgiastic expression of what Richard Hofstadter called the “paranoid style in American politics,” only now ratcheted up by new media,  from the news-as-entertainment of FOX to a bunch of bored nerds in Brooklyn. While one can rightfully complain that the mainstream media isn’t giving enough attention to, say, G20 protesters, a protest movement shouldn’t expect the powers that be to smile fondly on them. It is the movement‘s responsibility to attract attention to itself, to insist that injustice be seen, even when all the habits and institutions of society would prefer to do otherwise.

McGrath’s article does well in insisting that the Tea Party is genuinely grassroots, despite evident approval and support from on high. It is eclectic, emotional, grounded in history, populated by the marginalized, and undeniably radical. Love them or hate them, the Tea Partiers do remind us is that change is made out of people, passion, and tireless organizing. When the left forgets this, evidently, the right remembers.