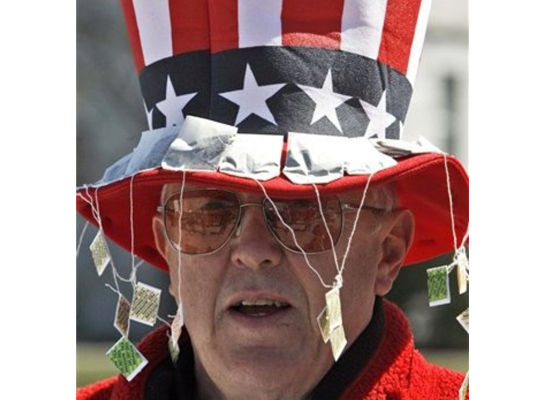 On the one hand, as a new CNN poll shows, 11 percent of Americans identify with the movement. That’s a much larger portion of the population than I would have guessed. Think about it, one in ten!

On the other hand, as blogger Juan Cole pointed out, twice that percentage of the population favors socialism. Yet socialism gets far less media attention. In fact, according to Cole, Tea Party received 15 times as many mentions in the media last month as socialism.

The CNN poll also breaks down the Tea Party demographics to show that the movement is disproportionately comprised of white men with higher-than-average incomes, who live in rural areas. While that’s not exactly the picture of average working class Americans some say compose the movement, I can’t help but wonder if 30 million Americans fit the description of white, male, educated and rich. I won’t say the data is flawed, but it does confuse me.

Let’s continue to assume that the Tea Party movement is a relatively large, but homogeneous, group of people. Can such a movement succeed? The recent indigenous protests in Peru had some level of success with probably fewer people. Of course, they were fighting for a very specific and defined cause, rooted in social justice. The same cannot be said for the Tea Party movement.

I won’t argue that excessive government spending isn’t a legitimate gripe, but to mainly attack social programs and not the defense budget is rather inconsistent. A recent article by the vice president of the CATO Institute, of all things, pointed out this flaw:

The Tea Partiers insist they’re nonpartisan, devoted only to staving off our looming fiscal apocalypse by any means necessary. If so, they can prove their authenticity by backing substantial cuts in entitlements and defense.

Tea Party pressure has already forced President Obama to call for a three-year freeze of nonsecurity spending. But that’s just 16 percent of the federal budget. You could zero that out entirely next year and still end up hundreds of billions in the hole.

Rail against earmarks, foreign aid and “welfare queens” to your heart’s content. But all that comes to a rounding error in a $3.7 trillion federal budget, over 75 percent of which consists of defense and entitlements.

The Tea Partiers — often thought to be hawks — might further demonstrate their credibility by calling for cuts in the Pentagon’s $663 billion bottom line.

If the Tea Party Movement followed this advice and made its demands clear and consistent, it might be something to take seriously. I’d be willing to forget its demographics if its message was more on point and honest. But as long as it associates with Sarah Palin and Republican Party politics, it will likely remain lost to its own potential. Perhaps, this is just more evidence of the need for a left movement that takes on defense spending and shows it to be the real root of our problems.

Should the Tea Party Movement be taken seriously?