Professor Colman McCarthy, the Founder and Director of the Center for Teaching Peace in Washington, D.C. once commented that, “The most revolutionary thing anybody can do is to raise good, honest and generous children who will question the answers of people who say the answer is violence.” 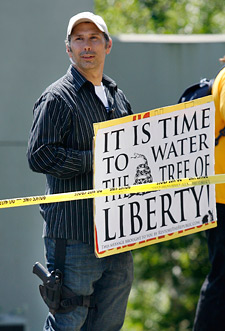 I was reminded of his words a few weeks back.  I was sitting in my dining room, talking to my friend Jeremy and his family about my work at the Coalition to Stop Gun Violence.  We were discussing the gun lobby’s current campaign to allow individuals to carry loaded handguns in public spaces across America—churches, parks, schools, government buildings, child day care centers, metro transportation, airports, etc.—when Jeremy’s nine year-old son Colin piped in.

“There are people who think you can prevent violence with guns?” he asked.

“Cuckoo,” Colin replied, tracing rings around his ear with his finger.

I was pleasantly surprised.  It’s not that Colin isn’t a great kid; he is.  But he’s been obsessed with guns since he was a baby.  I distinctly remember a boy of two—denied toy guns by his parents—running around with a vacuum cleaner tube and “shooting” everything around him.  Now, a few years later, he’s graduated to air guns, water guns and violent video games like Commando 2.  This fascination with firearms that boys seemingly acquire upon exiting the womb is both awe-inspiring and disturbing.

So how does this young boy, who delights in shooting his guests with his Nerf N-Strike Maverick Blaster rifle, have the maturity to grasp the enormous danger that real guns represent to our society?  Why is he is able to embrace the thrill of violence in fantasy while rejecting it completely in reality?

Professor McCarthy says, “Peace is the result of love,” but cautions, “If love was easy, we’d all be good at it.”  He also warns, “If we don’t teach [our children] peace, someone else will teach them violence.”

I must have had my own good influences because, like Colin, I grew up with a gun obsession.  One of my prized possessions as a boy was a plastic M-60 rifle, complete with unfolding tripod.  My friends and I loved to get our toy guns out and play “war” around our elementary school.  I was also in the first generation of video gamers, and played all the shooters:  Postal, Castle Wolfenstein, Doom, Duke Nukem, Quake, Soldier of Fortune, you name it.  And movies?  Die Hard, Predator, Assault on Precinct 13—I loved all that stuff. 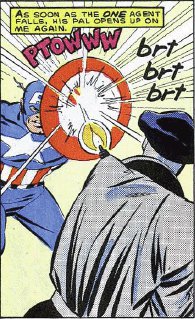 Yet I never had the desire to own any real firearms, or mimic the “protagonists” of these games/movies in real life.  I was a big fan of Marvel Comics growing up and it always struck me that Captain America never carried a gun—the bad guys he brought to justice did.  Today, as a husband and father, I have become a passionate advocate for nonviolence.

Professor McCarthy’s dream is to add comprehensive peace studies programs to the curriculum at the nation’s K-12 schools and colleges.  “Every member of Congress was in first grade someplace,” he says.  “Maybe if we taught them a little bit about Gandhi, Martin Luther King, the first day, we wouldn’t be in the mess we’re in.”

That’s a goal that’s worth working for, but until it is realized, we should all endeavor to learn from kids like Colin.

As Mother Theresa once said, “So often people say that we should look to the elderly, learn from their wisdom, their many years.  I disagree.  I say we should look to the young: untarnished, without stereotypes implanted in their minds, no poison, no hatred in their hearts.  When we learn to see life through the eyes of a child, that is when we become truly wise.”