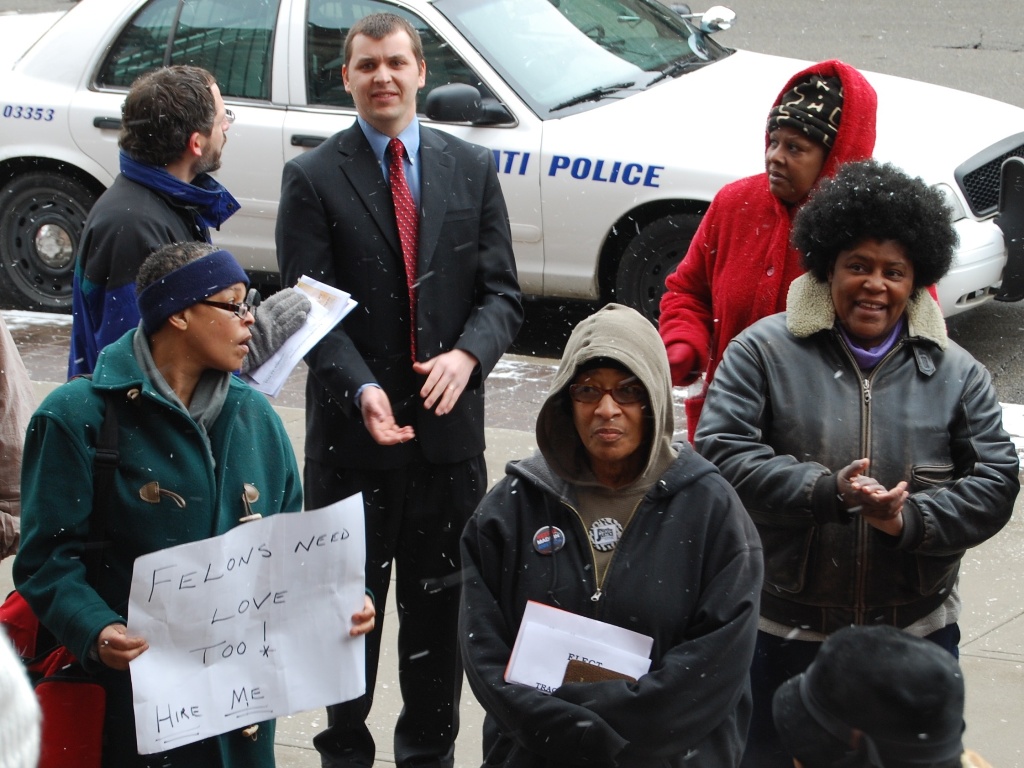 Over fifty Cincinnati residents, myself included, arrived at Cincinnati’s City Hall for the Commission’s 9 am meeting only to find that the Commission had abruptly canceled its section for public comment.  “Ain’t council chambers the people’s house?” asked one individual in the crowd.  Leaders of the Fair Hiring Campaign negotiated for two minutes of speaking time before the Commission.

Former offenders face employment barriers both de facto and de jure even for seemingly ancient convictions that have no relevance to the job. These restrictions hinder the ability of millions of Americans (one in 99 is currently incarcerated) to reintegrate successfully after completing their sentences.

For at least three years, the City has opposed proposed changes to its no-felon hiring policy.  Frustratingly, the Mayor denies that such a policy even exists.

Ironically, by condemning rehabilitated people to unemployment and under-employment, the no-felon hiring policy ends up increasing the burden on the City’s own overloaded criminal justice and public welfare systems.

Proposed changes would allow city government to consider an applicant’s evidence of rehabilitation. “We’re not asking for guaranteed jobs,” Stephen JohnsonGrove of the Ohio Justice & Policy Center told the Commission.  “We just want fair consideration for people with old and irrelevant criminal records.”

After speaking to the Commission, the group walked to the Mayor’s office to present over 1000 letters from Cincinnatians supporting a fair hiring policy.

The no-felon hiring policy is based on fear, not evidence.  Depending on a person’s age and offense, research finds that after a certain period of time s/he is no more likely to offend than same-aged members of the general population.  For 18-year-olds arrested for robbery in 1980, that point was 7.7 years. Yet people convicted of crimes less serious than robbery still face barriers decades later.

Employment barriers don’t make us any safer.  They serve, instead, to punish people years after they have paid their debt to society.  “You can get over an addiction,” one person told me, “but a conviction stays with you for life.”

What ‘Orange is the New Black’ got wrong about compassionate release

Rehabilitated ex-felons: Give us a chance