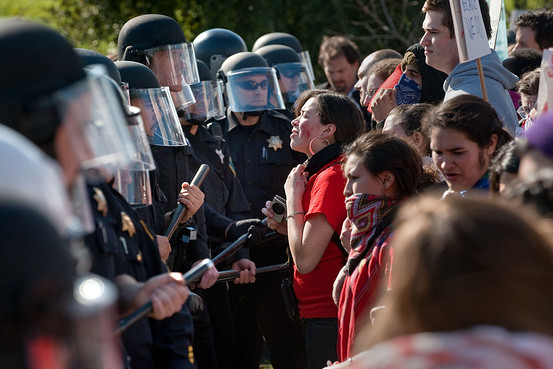 Peter Robinson, a former speechwriter for President Ronald Reagan, had an op-ed in the Wall Street Journal last week condemning the student protests in California for invoking the spirit of social justice movements from the 1960s and 70s. According to Robinson, the protests “demonstrated the entitlement mentality and self-absorption that has come to dominate much of higher education.”

We have here the vocabulary of the peace movement, of the struggle for decent conditions for migrants and other exploited workers, and of the civil-rights movement. Yet what did the protesters demand? Peace? Human rights? No. Money. And for whom? For the downtrodden and oppressed? No. For themselves. At a time when one American in 10 is unemployed and historic deficits burden both the federal government and many of the states, the protesters attempted to game the political system. They engaged in a resource grab.

Yeah, these whiny college students have it all: massive loan debt and a shrinking job market. Why should they complain about being exploited by the student loan industry or being victims of poorly managed state funds? So what if they have to spend more money to go to school longer or possibly not at all for a job that’s likely not waiting for them.

And what about the issues facing minority students that have also bubbled to the surface? I guess that doesn’t show that these protests are about more than just money or that they have something in common with the struggles of minority groups in the 60s and 70s.

It’s clear we all need a lesson in economic justice from Peter Robinson. How else are we going to understand why it’s not “entitlement mentality and self-absorption” when wealthy conservatives like Robinson and his colleagues at the Hoover Institution oppose taxing the rich?

Yup, if there’s one thing history has proven it’s that self-absorbed people love to protest, engage in nonviolent direct action, face possible arrest or even police brutality. Those are clearly the traits of people who feel a sense of entitlement, not people who feel burdened, exploited and marginalized.