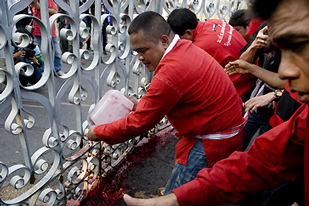 When we reported on the pouring of blood outside the Thai Prime Minister’s home in Bangkok the other day, I have to admit I was a little confused about the purpose of this action. Blood has often been sprayed or sprinkled by Western activists, such as the Ploughshares, to symbolize the death of innocent people. But the huge jugs of blood collected during a series of blood drives by the red-shirted Thai protesters and poured en masse to create what seemed like a horrifying stream of blood in front of the PM’s house seemed to indicate something totally different. I just wasn’t sure what that something was. None of the articles I read seemed to offer an explanation. As it turns out, I wasn’t the only one with questions. The BBC ran a story yesterday explaining the significance of the blood protest because of the way many Westerners had perceived it:

Many Thais and Westerners were revolted by the spectacle and worried by the hygiene implications of the recent blood-spilling on Bangkok’s streets.

Some denounced the sheer wastefulness of a precious resource which could have been used to help the sick.

But red-shirt leaders said the blood spilling was a sacrifice for democracy and a curse on the government.

While a lot of the same concerns went through my mind, such as the hygiene issue, I told myself there must be some cultural explanation. It seems I was right.

In the battle for Thailand’s political soul – played out over several years by “yellow” and “red” waves of protesters – symbolism is probably the most important weapon.

A powerful belief in astrology and the supernatural (‘saiyasat’) co-exists alongside an increasingly commercial, globalised culture.

This is not just a frame of mind found in far-flung rural areas. Many of the country’s top leaders, civilian and military, have actively participated in magical rituals to seek special powers and enlist them on their side.

The rest of the story attempts to explain this mysticism, but the important thing to understand, it seems, is that we must be careful not to judge a protest in a different part of the world based on our own cultural practices.

That’s not to say the blood protest was the right tactic for the red-shirts to take. It simply means that we must judge it on the cultural standards of the Thais. Hopefully that kind of analysis will surface soon.