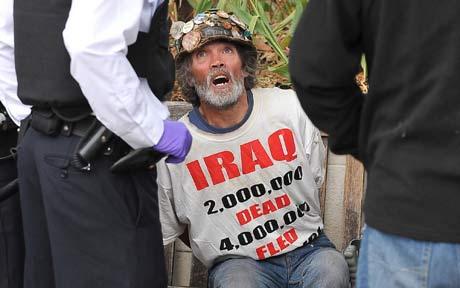 On Tuesday morning, Boris Johnson, the mayor of London, took initial steps to close Democracy Village – the protest encampment on Parliament Square that sprung up earlier this month – saying it is doing “considerable damage” to the area and threatening tourism.

Metropolitan Police began by arresting veteran anti-war protester Brian Haw, who has been camped outside of the Parliament since 2001, and fellow demonstrator Barbara Tucker.

According to an article in the Guardian:

In separate moves, residents of the camp, which consists of 31 small dome tents, three communal marquees, a tee-pee and a pair of compost toilets, woke up to find notices from Johnson’s officials demanding they leave immediately tucked under their groundsheets.

The camp includes communists, climate change protesters, opponents of the war in Afghanistan, anarchists and homeless people and features a communal vegetarian kitchen, an IT tent and a “peace garden” with an oak sapling surrounded by vegetables growing in the ground.

Whether the government will actually be able to get rid of Haw and the camp on charges of trespassing is yet to be seen. He has already successfully resisted many legal attempts to end his protest and is determined to stay put. As the BBC reported:

Speaking outside the court, Mr Haw also set out his intention to remain in the square for the rest of his life.

“We’re there because our country is committing infanticide, genocide, the looting of nations.

“I’m determined to be there until they kill me. How much longer will that be?”

Has the movement to prevent gun violence hit a tipping point?