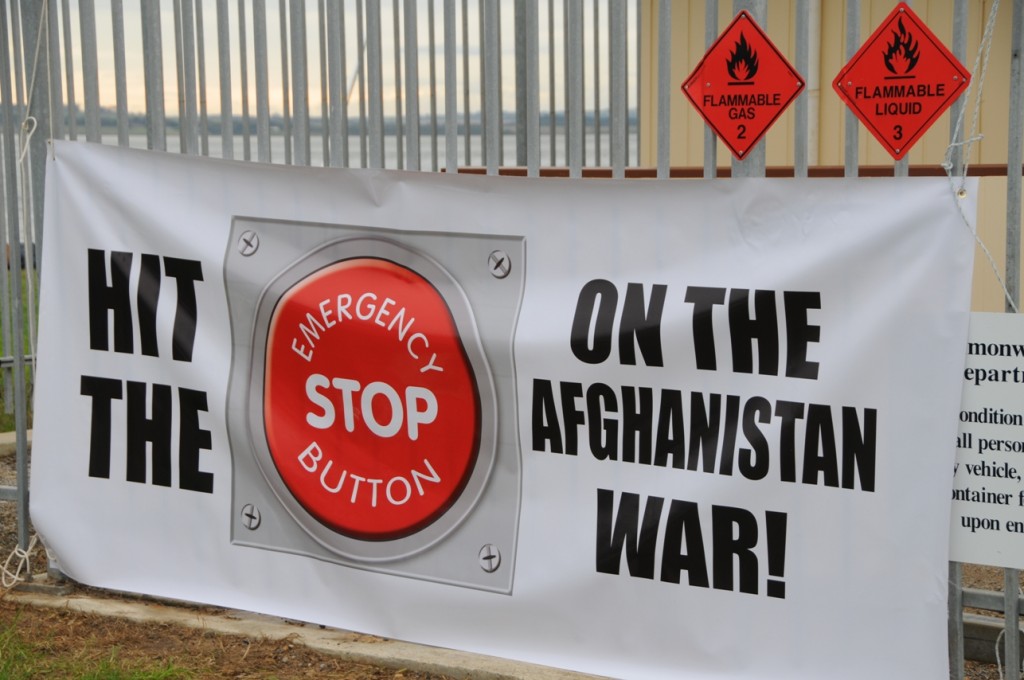 Inspired by Fr. Daniel Berrigan’s call to be prepared to bear significant costs for peacemaking, my small group of antiwar activists in Melbourne, Australia decided to “up the ante” and try some actions that might be potentially more costly than anything we had done before resisting the war in Afghanistan. This was back in October 2009.

This culminated in our action at Swan Island, a highly secretive military base in southern Victoria, Australia, near the entrance to Port Phillip Bay. The island also houses a yacht club and public golf course, all accessible via a bridge which is guarded during the day and locked at night. The base itself provides training for Australia’s elite SAS troops, who are playing most of our combat role in Afghanistan, as well as ASIS, or Australian Secret Intelligence Service (our equivalent of the CIA in the US). We figured if we could disrupt the activities of this base, we could probably disrupt some of the preparation for and implementation of the war.

So in the early hours of March 31 (the week before Easter) Jacob Bolton, Jessica Morrison, Simon Reeves and myself went to Queenscliff and swam the short distance to Swan Island.

Having worked out that most people arrive for work there around 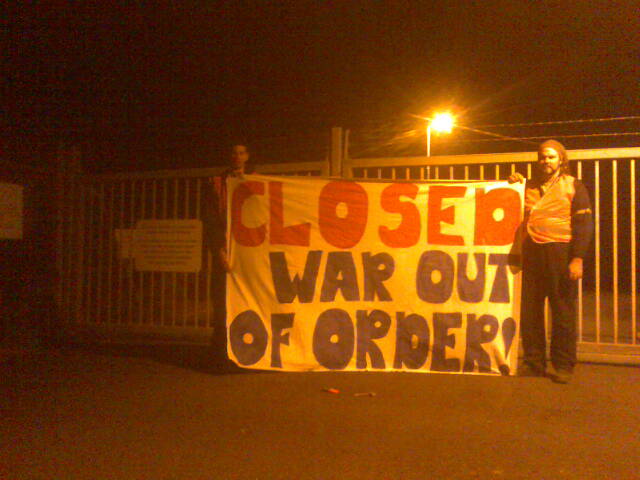 6am (and not wanting to block the golf or yacht club traffic), we thought blocking the gate to the military base on the island was our best chance. Simon Reeves and Jacob Bolton stood in front of the gate with a banner which read, “Closed: War Out Of Order” while Jess and I made our way inside.

Jake and Simon managed to block the gate for more than an hour while staff and police decided to arrest them; meanwhile Jess and I had waited for daylight before making our way inside the inner perimeter fence (all gates had been left open except for the one Jake and Simon were blocking).

There we found and turned off the main switchboard to one sector and then came across a seven meter satellite dish. Finding the “emergency stop” button, we pressed it and made our way to the administration center before being found by security. There we were arrested and (in a move we assume was designed to keep the story quiet) charged only with trespass.

We came to court on June 15 expecting a backlash. For me, court is always an opportunity to invite a system which serves to legitimize war and the machinery behind it to join us in withdrawing their support for war. Failing that, it’s an opportunity to invite specific people in the court (the magistrate, court clerks, those in the gallery) to act in ways which erode support for the war (eg. small sentences, words of support). Since we were pleading guilty (the necessity defence has never worked in Australia, and we didn’t have the energy to pursue it well) we imagined we’d get larger or smaller fines depending on what mood the magistrate was in.

After we explained our actions as in the context of engaged citizenship, Christian faith and humanitarian intent, and to our great surprise, the magistrate reached for a little known and very rarely used clause in the Sentencing Act which allowed him to dismiss the charges completely. This was a stunning result, and constituted clear support for our actions under the circumstances.

But there was still one step left to take: as part of continued defiance and seeking to use the court case to broaden the local war resistance movement we returned to Swan Island immediately after the case was dismissed. Here we had organized a public demonstration at the front gate, this time having liased with police (who turned out in force—almost one member for every

protester, including water police). Around 40 of the 50 people who had come to support us in court came back to Swan Island with us. After an hour of singing, chalking messages on the road and hearing from war veterans and aid workers, nine people were arrested blockading the gate. For eight of the nine it was their first arrest. A hugely successful day in terms of broadening the local movement.

At the same time, the story was not mentioned in any major daily newspaper or outlet—neither the stunning dismissal of our charges, nor the nine arrests. This despite (or perhaps because of?) the fact that an Australian soldier had been wounded in action at almost the same time as we were in court.

This seems to add further weight to our assessment that while antiwar sentiment is high (a recent poll found that 54 percent of Australians oppose the war in Afghanistan), the opposition is largely passive, indeed inert.

While our dismissal could be seen as a clever ploy to keep the story quiet, I suspect the magistrate was genuinely moved (a small conviction and fine would have been less spectacular, and dismissal constitutes tacit support for illegal action). Still, the result is the same: no backlash.

Which means that I suspect we are back to square one: how do we use nonviolent tactics to invite the repression which garners the sympathy of the majority in order to move them to act? And how do we sustain and broaden a movement willing to suffer in such ways? Almost nine years into the war it feels like we are just beginning.