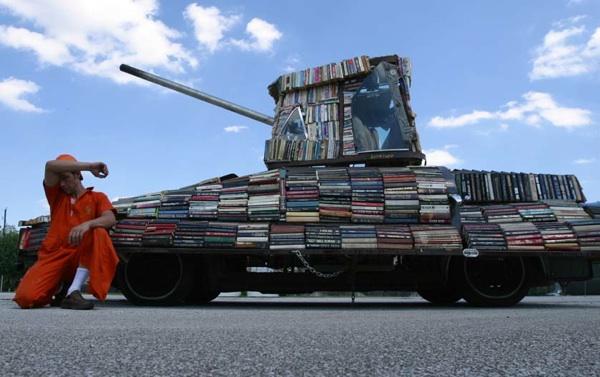 Cruising down the busy streets of Buenos Aires, Argentinean artist and peace activist Raul Lemesoff has converted a 1979 green Ford Falcon into a moving library with the title “Arma de Instruccion Masiva” (Weapon of Mass Instruction) painted across it. Clambering out of the vehicle, he greets bystanders with a smile and offers them a book.

The Ford that buses him around used to belong to the Argentinean armed forces during its dictatorship. But now covered with over 900 hardcover books, he makes his cross-country trip handing out free literature for people in the cities of Argentina and in remote areas where schools and books are scant. He also accepts donations in order to supply schools in need.

In a recent interview, Raul explains the purpose of his project :

“The Weapon of Mass Instruction is meant to get people to recognize various aspects of life: sharing, education, and also to have a good time. It’s a contribution to peace through literature.”

By taking what was once a symbol of suppression and violence, Raul has transformed it into a peace campaign of communication through recycled books.

I’m not sure if Raul and his artistic rendered Ford Falcon are still traveling (the sustainability of the project depends on donations that can match-up or surpass the handouts). Despite any of these shortcomings, he plans on building more booktanks that will travel to other parts of the world.

How the battle of Brooklyn College backfired

Swarthmore College’s rude awakening to oppression in its midst