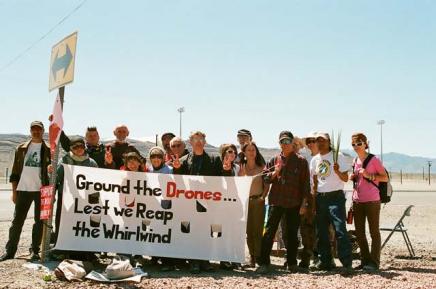 In his weekly online column for the National Catholic Reporter, Fr. John Dear has a wonderful piece about what transpired in court last week when he and 13 others stood trial for protesting the use of drones last year at Creech Air Force Base, outside of Las Vegas.

At the start of the trial the judge stated that he would not allow testimony on international law, the necessity defense or the drones. He only wanted to hear about the charge of “criminal trespassing.”

While the defendants were expecting that the judge wouldn’t allow their expert witnesses to speak, they proceeded to call on Ramsey Clark, former U.S. attorney general under President Lyndon Johnson; Ann Wright, a retired U.S. Army colonel and one of three former U.S. State Department officials who resigned on the eve of the 2003 invasion of Iraq; and Bill Quigley, legal director for the New York City-based Center for Constitutional Rights to testify. To their surprise, the judge let them all speak, and their testimony went on for hours.

Here is an excerpt from a powerful, spontaneous closing statement made by Brian Terrell of the Des Moines Catholic Worker:

Several of our witnesses have employed the classic metaphor when talking of a necessity defense. There’s a house on fire, and a child crying from the window and there’s a no trespassing sign on the door. Can one ignore the sign, kick down the door and rescue the child?It was a great privilege for us to hear Ramsey Clark, a master of understatement, who put it best. “Letting a baby burn to death because of a no trespass sign would be poor public policy.”

I submit that the house is on fire and babies are burning in Afghanistan, Iraq and Pakistan because of the activities at Creech AFB.

The baby is burning also in the persons of the young people who are operating the drones from Creech AFB, who are suffering from post traumatic stress disorder at rates that even exceed that of their comrades in combat on the ground.

The house is on fire. And we fourteen are ones who have seen the smoke from the fire and heard the cries of the children. We cannot be deterred by a No Trespassing sign from going to the burning children.

John Dear describes what happened next:

As he finished, Brian burst into tears and sat down. Many in the courtroom wept. Then Judge Jansen stunned us by announcing that he needed three months to “think about all of this” before he could render a verdict. He marked twenty five years on the bench just the day before, he said, and this was his first trespassing case and he wanted to make the best decision he could. There is more at stake here than the usual meaning of trespassing, he noted. The prosecutors were clearly frustrated and disappointed. With that, we were assigned a court date of January 27, 2011, to hear the verdict. As he left, he thanked the fourteen of us and the audience, and then seemed to give a benediction: “Go in peace!” Everyone applauded.