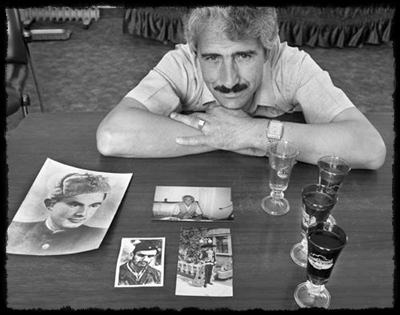 Over on her blog, Sojourners editor Rose Marie Berger has a nice post about a story of nonviolence from World War II that I had never heard, but sounds quite amazing. She writes of the work of photographer Norman Gershman, who in recent years has documented the stories of Albanian Muslims who at great risk to themselves hid more than 2,000 Jews in their homes over the course of the war.

According to a recent article in the St. Louis Post-Dispatch about an exhibit of Gershman’s photographs of these families that has traveled extensively around the world:

Gershman said it wasn’t just Muslim families who shielded Jews from the Nazis, but also Orthodox and Catholic families. All of them were motivated by an Albanian code of honor called “besa,” a concept that can be translated into “keeping the promise,” Gershman says. The Albanian villagers were motivated to risk their lives by the simple concept of helping one’s neighbor.

Before the war, Gershman estimates from his research, only about 200 Jews lived in Albania, a country that is about 70 percent Muslim. During the years of occupation, 10 times as many Jews streamed into Albania to escape persecution from Poland, Yugoslavia, Czechoslovakia, Greece and Italy. Gershman says it was the only country in Europe where the Jewish population grew by the end of the war.

Gershman’s work was also published in what looks like a beautiful book, Besa: Muslims Who Saved Jews in World War II.

As we’ve noted on this site, this is not the only story of Muslims saving Jews during World War II, despite the fact that there are no Arab names among the 20,000 non-Jews recognized at Yad Vashem, the Holocaust Martyrs’ and Heroes’ Remembrance Authority, in Jerusalem. PBS ran a documentary earlier this year called Among the Righteous, that told the previously unknown story of how many Arabs did help Jews in parts of Nazi-occupied Tunisia.

This story from Albania also reminds me of the nonviolent resistance in Denmark and really every other country that I know of where people risked their lives to save Jews during World War II, in that where anti-Semitism was not rampant and people saw Jews as their brothers and sisters, they were often able to avert the Holocaust. The problem is that because anti-Semitism was so widespread throughout Europe, in many places the local populations were either passive or actively cooperated with the Nazis in their effort to exterminate the Jews.

How activists plan to win on net neutrality

How ‘Strategy for a Living Revolution’ came to life