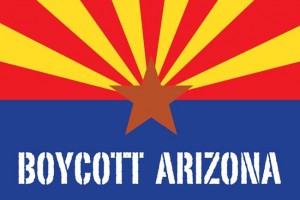 In an article that was overwhelmingly critical of the boycott of Arizona over its draconian immigration law, AP writer Bob Christie points out that there is now an estimate for the financial impact of the boycott on the state.

Businesses have lost lucrative contracts and conventions have relocated, performers called off concerts, and cities and counties in about a dozen states passed resolutions to avoid doing business with Arizona. A report released Thursday says the boycott has cost the state $141 million in lost meeting and convention business since Republican Gov. Jan Brewer signed the law in April.

Last month, Zack de la Rocha, frontman for Rage Against the Machine, and Salvador Reza wrote a piece for the Huffington Post, in which they made it clear that despite the fact that the federal government won an injunction blocking the worst parts of SB 1070, the boycott must continue.

So long as there is a 287(g) agreement with local police; So long as the Federal Secure Communities program is in local jails; So long as federal programs are used to make Arizona a modern apartheid state empowering the governor and state legislature to violate civil and human rights. The resistance of organizations, artists, writers and governments will continue. The boycott of Arizona will not stop, and we will expand our struggle locally, nationally and internationally asking all peoples of conscience to join. La Lucha Sigue (The Struggle Continues).