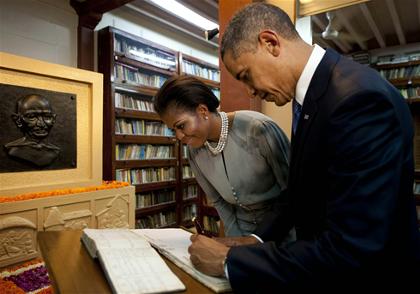 On Saturday, President Obama paid a visit to Gandhi’s home during his first trip to India. In his speech before the Indian Parliament, he reiterated that Gandhi, whose images and quotations can now be found in the White House, is one of his personal heroes.

“Throughout my life, including my work as a young man on behalf of the urban poor,” Obama said, “I’ve always found inspiration in the life of Gandhiji and his simple and profound lesson to be the change we seek in the world.”

He then quoted Martin Luther King, who “called Gandhi’s philosophy of nonviolent resistance ‘the only logical and moral approach’ in the struggle for justice and progress.”

Unfortunately, Obama clearly does not share that sentiment with King or Gandhi, despite his claims to the contrary. As the New York Times noted, this “paradox” could be seen in the fact in addition to celebrating Gandhi, Obama was “also selling military transport planes and bringing along 200 American business leaders.”

As author Vijay Prashad said in his interview with Democracy Now! yesterday, “already it seems some arms deals have been signed. One arms deal will perhaps be signed at the end of the year, and that is for 126 jet fighters. That deal will be about $10 billion.”

Moreover, while Obama was touring Gandhi’s homeland, the Afghan war raged on and in neighboring Pakistan, a pair of US drone strikes killed 14 people. So much for nonviolent resistance being the only logical and moral way forward I guess.