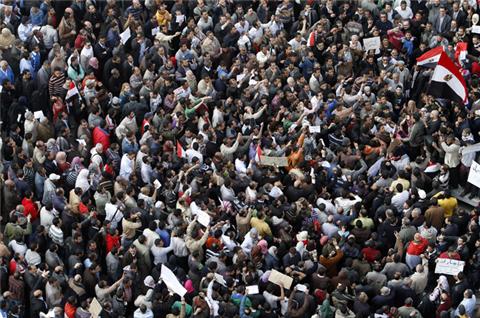 For the sixth day in a row, protesters are out in force across Egypt. Democracy Now!’s Sharif Abdel Kouddous just tweeted that: “Today has the most people I have seen yet in Tahrir Sq. Packed.”

F-16 fighter jets recently buzzed over Tahrir Square. While commentators on Al Jazeera are saying that the use of jets was seen by people on the ground as a sign of intimidation, the news agency recently tweeted that the: “army has just told the crowd gathering at Tahrir Square that military will not go against the people.” Again, it’s still not clear which way the military and other security forces will go, but if their loyalty towards the regime crumbles so too will the regime.

While their has been widespread looting and vandalism, the Washington Post’s Melissa Bell blogged that: “demonstrators claimed it was police in plainclothes who were sowing anarchy to discredit the protests.”

…that eyewitnesses have said “party thugs” associated with the Egyptian regime’s Central Security Services – in plainclothes but bearing government-issued weapons – have been looting in Cairo.

To what extent this is true simply cannot be confirmed yet. It’s also unclear how widespread this belief is among the people who are out on the streets of Egypt. If most do see the government as behind the looting, then it’s unlikely it will dampen the protests. More hard evidence that the looting is being led by the security apparatus itself could go a long way to further discrediting the regime.

UPDATE: Al Jazeera is reporting that opposition leader and a potential transitional president Mohamed ElBaradei “has joined the protesters at Tahrir Square in central Cairo. The Muslim Brotherhood has said that ElBaradei is to negotiate for the opposition.“ He is expected to deliver speech any time now that could be very significant. If you want to catch it I recommend tuning in to Al Jazeera’s live stream here.

UPDATE II: ElBaradei has made these “bold remarks” to the protesters:

You have taken back your rights and what we have begun cannot go back…We have one main demand — the end of the regime and the beginning of a new stage, a new Egypt…I bow to the people of Egypt in respect. I ask of you patience, change is coming in the next few days…

Al Jazeera is reporting that he is about to make longer speech. He doesn’t apparently have a mic, so hopefully the media will be able to make out his words.

Sharif Abdel Kouddous is tweeting that: “Baradei seen as non-corrupt, is respected. But he lived away too long, didn’t join earlier protests & this revolt was done w/o his help,” and “Some want Baradei to be in type of transitional gov’t. Feelings are mixed. His rep is untarnished but some question his ability to lead.”