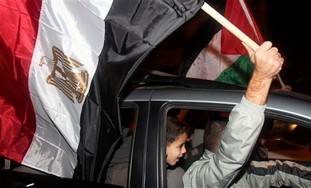 These are unusual times for nonviolence, with positive articles on the subject being published in the most unlikely places. For example, in an op-ed in the conservative Jerusalem Post, Gershon Baskin writes that Palestinians will eventually end the occupation of their lands through nonviolence, and that Israelis should be grateful for this.

The Egyptian Facebook, Twitter, SMS and satellite television revolution, which brought millions into the street, can also work in Palestine, except that it will not be against the Palestinian Authority, as some people would like to think, but against the occupation. If anyone questions the power of nonviolence, after the past weeks they should seriously reconsider what “a small group of thoughtful, committed citizens can do to change the world,” as Margaret Mead used to say.

Yes, in Gaza the people’s revolution will be against the Hamas despots, but in the West Bank and Gaza as well, their just call for freedom and liberation will be directed at the occupiers. And just as the entire world was with those young people in Tahrir Square and celebrated their victory, so too will the world be with the Palestinian people in their nonviolent outpouring for freedom, liberation and democracy.

If the response is violent, the world will look at Israel just as it looks at Hosni Mubarak today.

When the Palestinians take to the streets, the squares and the checkpoints in mass nonviolent demonstrations, they will win. We will eventually sit with them and negotiate final borders, and we will find a way to share Jerusalem as the capital of two states, and we will find a common way to address the refugee issue.

And when it is all over, we will thank young Palestinians for leading us to our freedom and our liberation, because we Jews, we Israelis, do not want to occupy another people. We want to live in peace with all our neighbors. So in the name of Israel, in the name of Palestine and in the name of peace, I say to the people of Egypt – thank you!

In Mexico, a victory for indigenous liberation

Glenn Smiley would be smiling