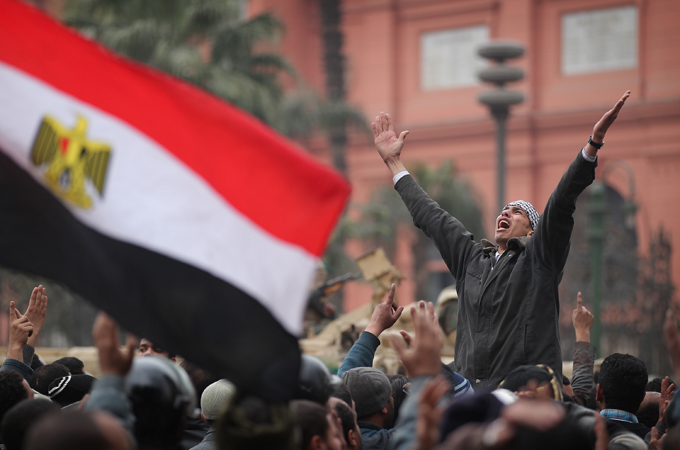 On the thirteenth day of protest in Egypt, Al Jazeera reports that about a million filled Cairo’s Tahrir Square for the “day of martyrs.” Hundreds of thousands of protesters also were out in Alexandria and Mansoura.

The Guardian’s Chris McGreal writes that Christians and Muslims held services to remember the hundreds who have died since the uprising began on January 25:

The Christian service was held with a large number of Muslims coming out to protect it, in solidarity. There is a real message coming out from the demonstrators that they represent all of Egypt no matter what class and what religion. They are aware that, particularly in the United States, there is this focus on the Islamic elements. There is a real attempt to show this is about all Egyptians not one section of society.

And after talking to protesters, the New York Times’ Nicholas Kristof reports that West’s worries about the Muslim Brotherhood are overblown:

I constantly asked women and Coptic Christians whether a democratic Egypt might end up a more oppressive country. They invariably said no — and looked so reproachfully at me for doubting democracy that I sometimes retreated in embarrassment.

“If there is a democracy, we will not allow our rights to be taken away from us,” Sherine, a university professor, told me … Like many, she said that Americans were too obsessed with the possibility of the fundamentalist Muslim Brotherhood gaining power in elections.

During the day, according to the AP, Egypt’s new Vice President Omar Suleiman met with the the opposition and:

…agreed to allow freedom of the press, to release those detained since anti-government protests began nearly two weeks and ago and to lift the country’s hated emergency laws when security permits.

Vice President Omar Suleiman endorsed a plan with the opposition to set up a committee of judiciary and political figures to study proposed constitutional amendments that would allow more candidates to run for president and impose term limits on the presidency, the state news agency reported.

These concessions by the government do not appear to have appeased the opposition, who are determined to stay until Mubarak steps down.

Uncovering the secret 50-year history of struggle in West Papua