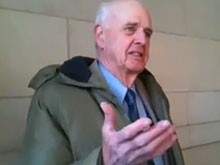 Yes! magazine has an interview with environmental writer Wendell Berry in which journalist Jeff Biggers asks him about last week’s four-day sit-in at the Kentucky governor’s office over the issue of mountaintop removal. Here are some highlights:

Jeff Biggers: So why are you here, personally? What’s the sense of urgency?

Wendell Berry: Well, the sense of urgency probably is that we ought to have done this 50 years ago. This has been going on that long—half a century. The damage from the beginning has been excessive. It’s now grown from excessive to extreme. The mining of coal is in conflict with the forest—for the sake of a perishable resource, we’re ruining a potentially permanent one. With good use, the forest could last forever; the coal is of value only while it’s burning.

Over these years, there’s been one protest after another—one march on Frankfort after another, one visit to a legislator after another. Last year we visited the governor. But all of this has been without any perceptible political effect—no acknowledgment even that the problems exist. And so we’re doing this simply as the next logical step. We’d exhausted all other possibilities, and we had to do something that would put these issues into the public conversation—in a way that, we hope, it will not be dropped again. That’s why we’re here, because it seemed to us we had no other alternative.

Jeff Biggers: We just celebrated the anniversary of the Greensboro sit-in in 1960. That was a historical example that showed us that a long-term, sustained sit-in is needed to get the nation’s attention. Do you think that something similar will have to happen here—long-term, sustained acts of civil disobedience?

Wendell Berry: We don’t know anything about the future. I assume, and I don’t think I’m unique in this, that this event will have consequences. I think it already is having consequences. People around the state are getting in touch with us and there’s activity going on in support of this effort. What will happen tomorrow, what will happen after tomorrow, we don’t know. But I think that all of us who are interested in stopping this terrible damage and this terrible oppression of people and the terrible effects that will go on and on because water flows—all of us understand that we are not approaching the time to quit. I’ve been interested in this problem ever since 1965, and I’m still in it. I don’t think I’ll last another 45 years, but I intend to stay interested and involved as long as the Lord spares me.

Jeff Biggers: What else do you want to say?

Wendell Berry: I don’t think that people on our side have any right to assume a good outcome. I think that the real, authentic motive for doing what we’re doing is because it’s right. And that has to be enough. If we have to have some guarantee that it’s going to be effective, sooner or later, we’ll become discouraged and quit.

While this sort of tenacity should not be discouraged—as it has powered many a victorious struggle—it doesn’t hurt to remind people that nonviolence works and that it tends to work better the more you understand it. Some people may not need that kind of reassurance to feel called to action, but sometimes those are the very people who would benefit from strategic planning.

Last week’s sit-in for instance, though powerful, might have been even more powerful had the fourteen participants held strong to their initial vow to not leave the governor’s office until he either stopped MTR or had them physically removed. Instead, it could be argued they came up short, rather than victorious, as many supports and organizers wrote.

Ultimately, though, this is no condemnation of their undoubtedly inspiring action. Not being privey to the ins and outs of their decision-making process, this criticism is merely heresay and meant only as a conversation-starter. So, what do others think, especially anyone involved or connected with Kentucky Rising?

Shame on labor protesters for not being more clever