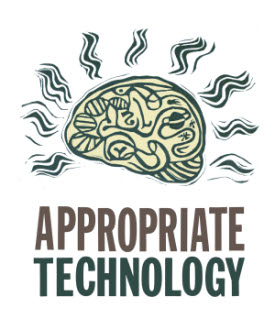 “You never change things by fighting the existing reality,” Buckminster Fuller said. “To change something, build a new model that makes the existing model obsolete.” In 2007, the Buckminster Fuller Institute began offering an annual $100,000 prize to the individual or team who could present the most practical, efficient, viable way to make a poorly functioning aspect of the existing reality obsolete. Bucky called this kind of solution a “trimtab,” named for the tiny rudder on an enormous ship that is ultimately responsible for steering. I wasn’t ready to enter the competition that year, but from then on, my mind began working around the clock on the riddle of the trimtab. What universally accessible and implementable strategy could bring as many people on board as possible, inspiring contributors to take immediate action using whatever materials may be at hand?

I began to study and implement appropriate technologies and permaculture. I started a Facebook group called USE HALF NOW to explore the notion that more mindful consumption may be an efficient place for many to begin (at least for those of us living in “overdeveloped” countries). I studied the wildly successful conservation and Victory Garden campaigns introduced in the U.S. and Britain during World War II. Leaders called on citizens to “use it up, wear it out, make it do, or do without,” and people ably complied. I wondered, what if a similar campaign could be put forth today? What if people were simply invited to have a stake in creating a healthier, more peaceful world? What if the sense of helplessness, disempowerment, and defeat that seems to pervade our culture could be overcome, simply by suggesting that each of us contribute to the solution in whatever ways make the most sense to us? Perhaps the fastest-acting, most accessible trimtab would not appear as some new magic-bullet “green” technology—instead it might come in the form of a radical  mental shift.

The German artist Joseph Beuys practiced social sculpture, a kind of art-activism that called upon audiences to participate. He believed that everyone, by infusing even the most mundane action with a sense of purpose and creativity, could contribute to ones’ own health and the health of society and the environment at large. By so doing, he proposed that “everyone is an artist” of their chosen vocation. Beuys taught that in order for social transformation to be truly constructive and enduring, methods used to achieve it must be as holistic and inclusive as possible.

21st-century advances in internet technology and network accessibility offer extraordinary new tools for the contemporary social sculptor. Interactive initiatives based on the dissemination and sharing of information have far greater potential than during any other age in history. Inspired by the developing power of virtual networks, the spirit of the 1940’s conservation campaigns, and the Buckminster Fuller Challenge itself, after four years of deep consideration, it finally seemed that an opportune moment to present a formal application to the Challenge had arrived. 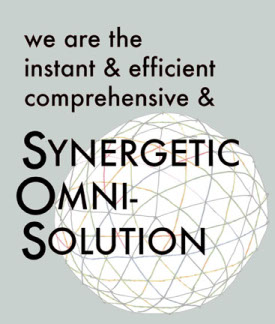 My proposal, “The Instant & Efficient Comprehensive & Synergetic Omni-Solution,” is a customizable, interdisciplinary, collaborative, philosophical approach to social change. It’s a conceptual framework within which to investigate our inherent interconnectedness and shared responsibility for the health of one another and our environment. SOS is at once a call to action, a compendium of possible strategies, and a means of describing, documenting, and contributing to do-it-ourselves revolutions currently underway around the world. It draws parallels between simple, emotionally-rewarding, system-defying action—such as line-drying laundry, freecycling, and home-growing food—and more complex, radical measures undertaken by those demanding basic human rights and an end to oppressive regimes. By cultivating a willingness to commit to small actions, one may become psychologically prepared to participate in and initiate larger ones.

Through the Synergetic Omni-Solution website, the SOS Facebook page, interviews with visionaries and activists, interdisciplinary art installations, and happenings such as the weekend of SOS launch events to be hosted by Ballroom Marfa in late April in Marfa, Texas, I plan to compile examples of innovative works in progress by others, connect dots, and gather collaborators. As the project proceeds, data will be collected from those in a wide range of fields—alternative agriculture, music, art, politics, history, philosophy, economics, and social, political, and environmental activism—and condensed into concise, comprehensive, strategic booklets, posters, videos, and multimedia guides to be disseminated digitally and via alternative media outlets.

To carry Beuys’ proposition a bit further, perhaps infusing actions with purpose and personal creativity not only makes us into artists, it makes us into activists as well. Realizing the power we have as individuals to shape the world may be the most efficient, accessible, renewable resource available to us—and also the most often overlooked. By approaching issues that affect us all from the standpoint of how to create the greatest health for the greatest number, through shared information and compassionate action, together we have an opportunity to craft a trimtab that’s more beautiful and efficient than anything any one of us alone could have imagined.

Alyce Santoro is a sound and conceptual artist/social activist working at the intersection between art and science. Proprietor of the Center for the Improbable & (Im)Permacultural Research, she is best known for inventing Sonic Fabric, an audible textile woven from recorded audiocassette tape. More on her work can be found at alycesantoro.com. Follow her on twitter @alyceobvious.

Everyone as activist: the Synergetic Omni-Solution