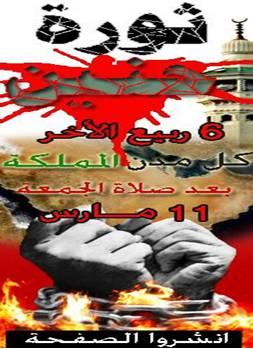 Over at the Huffington Post, Saudi Gazette columnist Sabria Jawhar makes a convincing case that speculation in the mainstream media that a nonviolent movement is forming in Saudi Arabia that could challenge the rule of King Abdullah has been dramatically overblown:

Since when do 465 people signing a Facebook Saudi “Day of Rage” page constitute a brewing revolution in a country of 16 million Saudis? It appears that most of the petitioners are non-Saudis with more than a few living outside the Kingdom.

While you definitely can’t judge the strength of a movement or impending nonviolent action but the number of people who have signed up to participate online, especially in a highly repressive state where the government could use that information to clamp down on activists, I definitely see Jawhar’s point.

In Egypt, the Facebook pages of the April 6 Movement and We Are All Khaled Said, which were two of the main groups that organized the protests there, collectively had more than half a million followers before the uprising began on January 25. In contrast, 465 followers does seem minuscule.

Jawhar also argues that the recent announcement that King Abdullah will be giving out an estimated $36 billion in social benefits is not nearly as shocking or important as it may appear on the surface.

The benefits will provide home loans, funding for NGOs, 15 percent fixed raises for government employees, scholarship money for Saudis studying abroad at their own expense and unemployment benefits.

News outlets ranging from Investment Watch to the Washington Post and the New York Times assert the money is simply to stave off protests with a Band-Aid. One BBC commentator likened the benefits to “bribery” to keep Saudis quiet.

One must wonder where these news organizations have been for the past five years. The Saudi government has been issuing these types of social welfare benefits annually since King Abdullah became the Kingdom’s leader in 2005. Each year, usually in December, the Saudi government allocates massive funds to help Saudis keep pace with inflation, build more schools and universities, and send Saudis abroad for a western education. This year’s announcement of providing unemployment benefits is not only new, but historic. Yet it is consistent with previous fund distribution schemes since 2005. This year’s allocation occurred in February and not December because the King has been in Morocco for medical treatment.

The fact that Saudi Arabia can dish out such a large sum for social programs alone is a factor that will make organizing a movement there more difficult that other countries in the region. As Stephen Zunes explained in a recent Q&A on MSNBC’s website:

Saudi Arabia, unfortunately, will probably be among the last to change. As an oil-rich … state, they can buy off a lot of potential opponents. In addition, the power of the hard-line Wahabbi clerics may make pro-democracy elements nervous about challenging the monarchy for fear at what might replace it.

Will the revolution spread to Saudi Arabia?