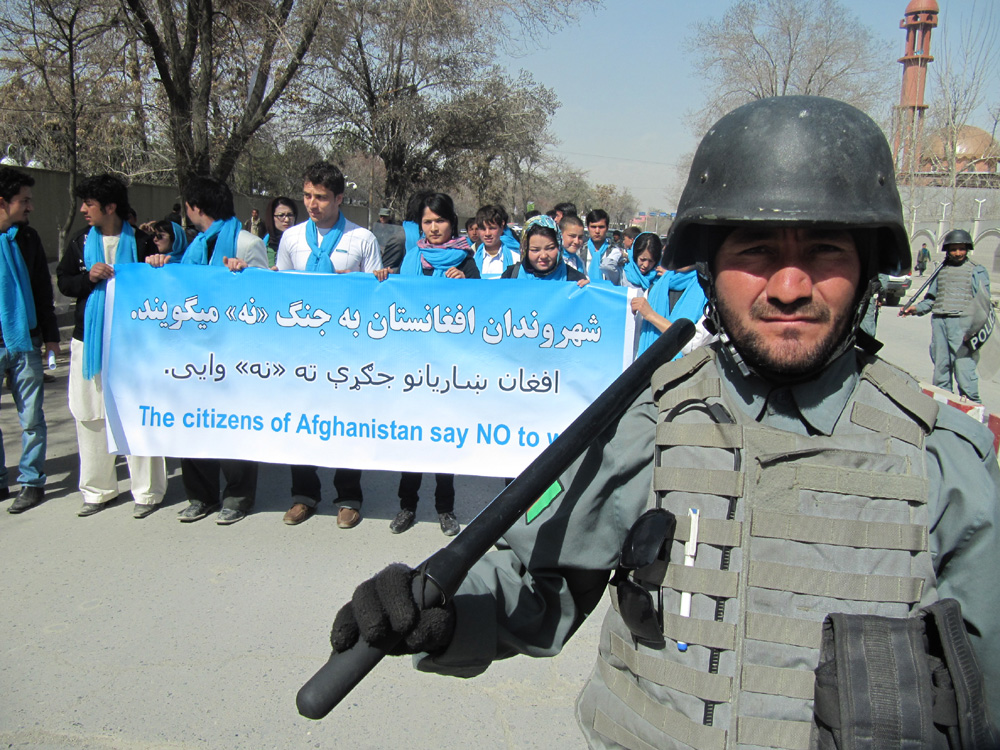 “I am done with great things and big plans, great institutions and big success. I am for those tiny, invisible, loving, human forces that work from individual to individual, creeping through the crannies of the world like so many rootlets, or like the capillary oozing of water, which, if given time, will rend the hardest monuments of pride.”
— William James

A few weeks ago General Petraeus, leader of the US forces in Afghanistan, announced that once again he could proudly report that progress was being made. “We have managed to reverse some of the Taliban’s momentum,” he announced grandiosely, as though this was some kind of accomplishment for the world’s largest military after almost 10 years of war, more than a trillion dollars and countless lives destroyed. Of course his further admission that the gains were still, as in the December review, “fragile and reversible,” didn’t similarly make the news headlines.

This equating of winning a war with “progress” is never questioned by our media or our society. It is simply an implicit part of being involved. If we’re killing more of the enemy than they are of us, it’s progress; if we’re not, then we need to try harder to kill more. War as a method of progress is never questioned, just its ‘success’ rate. Progress is in the eye of the war wager.

Yet for ordinary Afghans, this war has not brought progress of any kind. It has only destroyed what progress had been made, and set them back for decades to come. The longer it goes on, the worse it gets.

A couple of weeks ago the Afghan Youth Peace Volunteers marched through Kabul, to the UN headquarters, bearing a banner with a contrary message. “Peace is the prerequisite for any progress,” it proclaimed.

The alternatives to the great loudness, speed and force of the military is the quiet, slow, patient, painstaking work of relationship, work which the AYPVs are doing internationally through the Global Days of Listening, and locally through letters, the Bamiyan Peace Park, and other creative initiatives. For example, they made mobile phone pouches out of scrap leather, embroidered the word “peace” on them, and sent them with messages of love to students at schools in Kandahar in the south. The rarity of such action was underscored by the incredulous responses they received, such as, “I can’t believe such a love is possible.”

Yet after ten years of military effort, we can begin to see that even the grandiose claims of militarism are beginning to ring hollow. Poverty is worse than ever, as is security, with the conservative International Committee of the Red Cross declaring life “untenable” for ordinary Afghans.  Our continued unquestioning faith in the ability of violence to achieve results should be severely undermined. Even as Thomas Merton proclaimed the Vietnam debacle to be “the psychoanalysis of the U.S.” and the subversion of the myth of U.S. ‘progress’ so also Afghanistan should crack, if not shatter, our faith in redemptive violence and force to achieve good.

One of the inspiring things about the AYPV’s march is that it didn’t just proclaim a different way, it embodied it. As we’ve all seen in recent days, protests in Afghanistan typically end in violence and often deaths. Yet the presence of riot police didn’t intimidate or incite these young people to retaliate or flee in fear – instead they responded with active love. “Be alive and happy!” they called to police through beaming smiles.

These are small, humble, unspectacular actions but I am beginning to realise that this is how most real, lasting change for the better is made.

The Global Days of Listening too have been ways that ordinary people can connect across the world and make those most fragile yet strongest of bonds – human friendships. People from across the world are able to speak to people from Afghanistan, Iraq and Gaza, and to build relationships more robust and meaningful than any peace accord. “Mountain cannot reach mountain,” goes the Afghan proverb, “only human can reach human.”  This is what real progress looks like – progress for humans to become more humane, more compassionate, more connected.

How can allies protect communities threatened with violence?