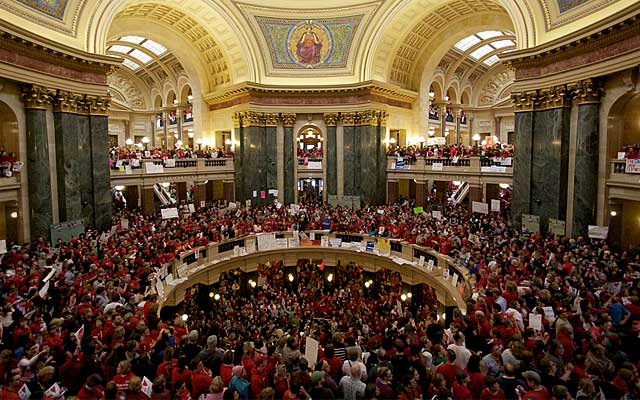 In a recent piece for TomDispatch, Rebecca Solnit made a simple observation about the nature of revolution that I hadn’t ever really considered:

At its best, revolution is an urban phenomenon. Suburbia is counterrevolutionary by design. For revolution, you need to converge, to live in public, to become the public, and that’s a geographical as well as a political phenomenon. The history of revolution is the history of great public spaces: the Place de la Concorde during the French Revolution; the Ramblas in Barcelona during the Spanish Civil War; Beijing’s Tiananmen Square in 1989 (a splendid rebellion that was crushed); the great surge that turned the divide of the Berlin Wall into a gathering place in that same year; the insurrectionary occupation of the Zocalo of Mexico City after corrupt presidential elections and of the space in Buenos Aires that gave the Dirty War’s most open opposition its name: Las Madres de la Plaza de Mayo, the Mothers of the Plaza of May.

It’s all very well to organize on Facebook and update on Twitter, but these are only preludes. You also need to rise up, to pour out into the streets. You need to be together in body, for only then are you truly the public with the full power that a public can possess.

One factor that perhaps makes revolution less likely in the United States, she argues, is the sheer size of the country and that a “majority seems to live in places that are themselves decentered.”

…the exercise of democracy depends upon having a literal commons where people can gather as citizens—a square, Main Street, park, or other public space that is open to all. An alarming trend in American life is the privatization of our public realm. As corporate-run shopping malls replaced downtowns and main streets as the center of action, we lost some of our public voice. You can’t organize a rally, hand out flyers, or circulate a petition in a shopping mall without the permission of the management, which will almost certainly say no because they don’t want to distract shoppers’ attention from the merchandise. That’s why you see few benches or other gathering spots inside malls. The result is that our ability to even discuss the issues of the day (or any other subject) with our fellow citizens is limited.

What do you think? How does where someone live (urban vs. rural) or the presence or lack of public spaces affect the likelihood or ultimate effectiveness of nonviolent struggle?

Where Gene Sharp departed from Gandhi — and where it leaves us