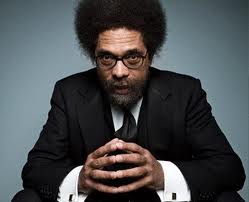 As the new Martin Luther King memorial is unveiled this month, there is going to be a lot of nonsense batted around about how much our post-racist society reflects the fruit of his dream. But Princeton philosopher and “bluesman in the life of the mind” Cornel West preempts this in a powerful op-ed in Thursday’s New York Times:

The age of Obama has fallen tragically short of fulfilling King’s prophetic legacy. Instead of articulating a radical democratic vision and fighting for homeowners, workers and poor people in the form of mortgage relief, jobs and investment in education, infrastructure and housing, the administration gave us bailouts for banks, record profits for Wall Street and giant budget cuts on the backs of the vulnerable.

He highlights four “catastrophes” that King was going to name in the sermon he was planning to preach the Sunday after his death:

Militarism is an imperial catastrophe that has produced a military-industrial complex and national security state and warped the country’s priorities and stature (as with the immoral drones, dropping bombs on innocent civilians). Materialism is a spiritual catastrophe, promoted by a corporate media multiplex and a culture industry that have hardened the hearts of hard-core consumers and coarsened the consciences of would-be citizens. Clever gimmicks of mass distraction yield a cheap soulcraft of addicted and self-medicated narcissists.

Racism is a moral catastrophe, most graphically seen in the prison industrial complex and targeted police surveillance in black and brown ghettos rendered invisible in public discourse. Arbitrary uses of the law — in the name of the “war” on drugs — have produced, in the legal scholar Michelle Alexander’s apt phrase, a new Jim Crow of mass incarceration. And poverty is an economic catastrophe, inseparable from the power of greedy oligarchs and avaricious plutocrats indifferent to the misery of poor children, elderly citizens and working people.

King’s response to our crisis can be put in one word: revolution. A revolution in our priorities, a re-evaluation of our values, a reinvigoration of our public life and a fundamental transformation of our way of thinking and living that promotes a transfer of power from oligarchs and plutocrats to everyday people and ordinary citizens.

In concrete terms, this means support for progressive politicians like Senator Bernard Sanders of Vermont and Mark Ridley-Thomas, a Los Angeles County supervisor; extensive community and media organizing; civil disobedience; and life and death confrontations with the powers that be. Like King, we need to put on our cemetery clothes and be coffin-ready for the next great democratic battle.

Ambazonians struggle for independence from Cameroon amid military takeover

The churches pray for peace in Ukraine