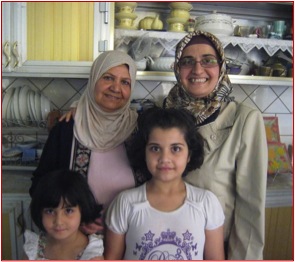 Nothing, not even an ongoing war, could keep Sister Martha Ann Kirk from embarking on two separate research trips to Iraq in the summer of 2010 and again this past June.

An eye-opening set of experiences to say the least, Kirk—a professor of Religious Studies at the University of the Incarnate Word in San Antonio, Tex.—interviewed more than 140 people in Iraq, including women spanning three generations currently residing in one of the most war-trodden areas of the world. Her research partner, Sister Patricia Madigan, the Director of the Dominican Centre for Interfaith Ministry, Education and Research from Sydney, Australia accompanied her this year.

“Our culture has been saturated with violence, destruction, and negative images of Iraqis since about 1990,” said Kirk, when asked about her interest in the women of northern Iraq. Through her research, she hopes that we may all “recover our common humanity.”

At the center of her investigations lie women’s voices, experiences, and resilient courage, many of which have been ignored in years past. The women range in age from elderly to little girls. Their education levels are often as disparate; many illiterate grandmothers and mothers determined to work hard to provide better opportunities for their daughters.

Kirk’s research is funded by the Gülen Institute at the University of Houston, an organization affiliated with the Institute for Interfaith Dialogue and founded by Fethullah Gülen, a Turkish Islamic scholar who encourages education through respect for diversity, justice and peace. Turkish Muslim volunteers promote Gülen’s movement through schools worldwide, including some that Kirk researched in northern Iraq.

Built in 1994, six years after Saddam Hussein ordered the massacres of 150,000 people in northern Iraq, the Fezalar schools brought education and hope for a better future to the children of this area. This same education is opening the horizons for many young women in this area, providing them with confidence, knowledge and skills that can encourage reconciliation and peace.

Kirk sat with these women in their homes, shared food, and took photos and notes as she documented their experiences.

“We have had wars and wars and more wars,” said one woman. Though peace has yet to be found in northern Iraq, these women’s words and friendship give glimpses of hope. Another woman said that the best thing she has been learning from the Fezalar schools is not to hate. “Hate is a prison,” she said.

Kirk says: “We need to see the faces of children—our human brothers and sisters, so that we may build a future together that gives their children and our children a chance to develop a world of hope and compassion.”

Kirk’s photo exhibit—titled “Iraqi Women of Three Generations: Challenges, Education, and Hopes for Peace”—will be shown in Austin at the St. Edward’s University Library from October 1 to 28.

This exhibit of 23 panels has about three photos and stories of the women on each panel.  The panels are 36 inches tall and 24 inches wide. Use of the exhibit is free through the generosity of the Gülen Institute, but those wishing to host the exhibit must pick it up and return it to San Antonio, TX, or pay shipping charges.  For more information, contact Sister Martha Ann Kirk kirk@uiwtx.edu  Phone:  210-829-3854 or 210-225-3011.

Blanca Morales is a freelance journalist located in San Antonio, Texas. She is currently working on her Master's degree in Communication Arts from the University of the Incarnate Word.