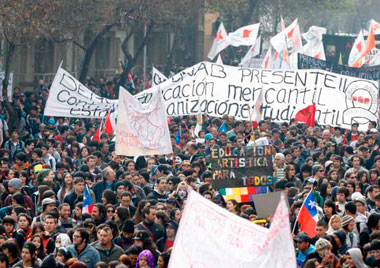 In Chile the movement for education is nothing new, as Luisa Trujillo eloquently explains on this site. I first heard about it in 2006, when a friend knocked on my door, shouting that I should come out to join the march heading to a plaza downtown. I rushed out.

Throughout my life, and that of my parents, we have watched students year after year assemble in city plazas to march for reforms concerning bus passes, school infrastructure, or for more scholarships. Sometimes it’s the high school students, as in the “Movement of the Penguins” (in allusion to high school uniforms) in 2006; other times, it’s been only university students; most times, we’ve cooperated with each other, understanding that whether we’re in our teens or our 20s, we strive for a common goal. This is not a movement; it has been the movement in Chile for nearly four decades.

This continuity is what powers the movement this year. Most of the university students who are now leading the movement (Camila Vallejos, Giorgio Jackson, amongst many others), five years ago were marching with the “penguins.” On that occasion, the protests were called off when Michelle Bachellet’s government conceded to the reforms demanded by the students. Now, those same students, and most of the population, realize the reforms were, at best, political demagogy, and at worst, a political maneuver meant to suppress the movement. The students are disillusioned and won’t stop marching, singing, and dancing until real changes are achieved.

Since the 48-hour general strike, the government announced on September 5th its third proposal to end the protests and resume the academic year. In response, the students presented four demands to resume dialogue, two of which the government accepted on September 15th, while completely rejecting the other two. And so, with the recent support of teachers, professors and miners, the students have called for a second general strike this Thursday and again on September 29th.

It might surprise those who live in the northern hemisphere that students haven’t attended classes for four months, given that “up here” most of that time has been summer vacations. However, this four month period is equivalent to what in the north would be the months of October, November, December and January of the academic year. Giorgio Jackson, also a leader of the movement, said on Friday that “the government is putting pressure on the student movement [by threatening] to cut financial aid to students” or to close the academic year for those who continue to join the movement. In fact, just this Monday, Minister of Education Felipe Bulnes announced that 70,000 high school students have officially “lost the academic year” in the capital. In spite of this pressure, the students continue to push forward the ideal of free public education.

When a movement is based on a popularly supported idea it gains strength, but when a movement is nurtured by a conviction so strong that it makes us willing to sacrifice what is ours—in this case, our own education—then there is no stopping it.

Monserrat Sepulveda is a Chilean activist anthropologist based in Chile. She obtained her B.A. in International Studies and Anthropology at Soka University of America, and has conducted research on state and gender violence in Central America. She worked for Todo Mejora Foundation, an Chilean non-profit working to prevent teenage LGBT suicide and bullying, and currently she is conducting research on allies. She can be reached at monsesepulveda@gmail.com.

The end of anonymity for Jeremy Hammond

Chilean students give up academic year for free education