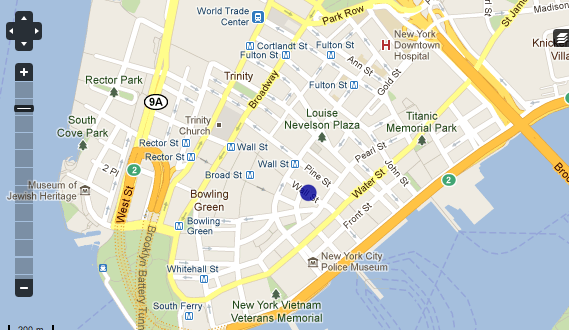 The signature tactic of this revolutionary year, it would seem, is a mass protest in a large, symbolic public space. We saw it in Cairo’s Tahrir Square, Bahrain’s Pearl Roundabout, and then in Madrid’s Puerta del Sol and Syntagma Square in Athens. Now, in the U.S., the October 6 movement is planning to take over Washington’s Freedom Plaza, while another coalition has been planning to do the same on Wall Street on September 17—tomorrow. (For a basic account of what’s going on with the latter, see my report from earlier this week.) If you want to get something done, apparently, the way to do it is to take the square. And this is exactly what the people at Adbusters had in mind when they made their initial call to occupy Wall Street, observing that “a worldwide shift in revolutionary tactics is underway right now that bodes well for the future”; they continued, “We want to see 20,000 people flood into lower Manhattan, set up tents, kitchens, peaceful barricades and occupy Wall Street for a few months.”

There’s a problem with this, though, and one sees it on the flip-side of 2011’s revolutions. There was Egypt, yes, but there was also Libya, Syria, and—tragic, too, but far less reported upon—Bahrain; each of these cases showed how public protest, Tahrir-style, makes a movement extremely vulnerable to crackdown. We at Waging Nonviolence were biting our fingernails throughout the initial Tahrir Square protests, filled as the place was with throngs of people in the open air, surrounded by tanks and soldiers. The protesters trusted their army, but maybe they shouldn’t have, for they were (and now still are) at its mercy. What really won the day, in the end, was not simply the highly vulnerable Tahrir crowd, but a coordinated, distributed, nationwide general strike that crippled the entire country’s economy until Hosni Mubarak left office. The crowd alone wasn’t enough. Gene Sharp, after all, has identified 198 different kinds of tactics that nonviolent civil resistance movements employ, and many more are imaginable—why stick to just one?

So, Wall Street. Manhattan’s financial district doesn’t have a Tahrir Square or a Puerta del Sol. It’s a cramped, confusing area full of narrow streets and tall buildings. It’s architecturally cold and thoroughly militarized. Even if there were the 20,000 people Adbusters wants to see, no one area could hold them all. Further, if a mass of protesters clustered together too much, police would have little trouble isolating them. A relatively quick dispersion seems highly possible on Saturday, and it may be disappointing to some who traveled from far and wide to take over that part of the city en masse. But, in fact, among those who have been thinking hard about the occupation for the past two months, it has become largely a matter of agreement that dispersion is part of the plan.

From the outset, the NYC General Assembly’s Tactics Committee has been discussing contingencies in the event that a mass assembly gets broken up: just break up. That’s okay, they think. Discussions are more inclusive, anyway, when a smaller number of people is involved. The General Assembly as a whole actually agreed at its last meeting that, on Saturday night, everyone should aim to disperse into smaller sub-groups in different areas of the Financial District. These little assemblies are to focus on coming to consensus—taking however much time they need—about what’s wrong with the system, what their vision is for a better future, and what it will take to get there. According to the tactical plan circulated by US Day of Rage, one of the major promoters of the effort, protesters should even consider spreading throughout the whole borough:

There are worse things than not getting to have another large public protest in the streets of New York that accomplishes little. It has been done before. According to New York City law, permits are necessary for groups of more than 20 to gather legally in public parks—so why not gather in groups of 19? Why not conduct small, legal, and still powerful actions like those that #occupywallstreet activists have been conducting throughout this week, such as yoga classes where Wall meets Broad and declaring guerrilla free-speech zones with free wireless internet access? What if this were happening on every corner in the city, for weeks at a time?

These days, nobody is more masterful with dispersion tactics than those behind the Jasmine Revolution in China. Working in an environment of extreme, ruthless oppression, they’ve learned to be very creative. Their signature move is the so-called “strolling” protest: large numbers of people gather at a public place, designated over the internet, and walk around innocently, looking up at the buildings and ignoring each other. Obviously, there’s a protest happening, because there’s a huge crowd of people in one place, and a phalanx of police are watching. But how do you distinguish a protester from a bystander? You don’t. You can’t, really. You’ve created a disruption, but no targets, and no actual illegality. Meanwhile, people become less afraid to resist when they know that others are with them.

When the Chinese protesters want to hang a subversive banner, they don’t just tie it to some building where it can be easily taken down; they attach it to a hot-air balloon and let it loose in the middle of a big city. There, everyone can see it and nobody can remove it until the military revs up its anti-aircraft batteries and shoots it down, making the shooters themselves look foolish—they’re shooting down a balloon. That’s a textbook dilemma action.

Many people in the NYC General Assembly have concluded that their goal right now is not so much to announce a demand as to build a movement, to break down the habits of business-as-usual and get the public to imagine that a different kind of world is possible, while taking steps toward making one actual. They have to create a broad-based, powerful uprising if they’re going to obstruct the influence of money in politics with their own human capital. Staging a massive, centralized, unified protest mob is one impressive way, perhaps, of doing that. But it’s not the only way. It may not even be the best way.

In any case, the organizers have made it clear that their main priority is not some kind of futile clash with the police, or an orgy of tactical masterminding. The goal is to be inviting, rather than to scare potential allies off by dwelling too much on what the police will do. That’s why they’ve planned to start Saturday—well before the 3 p.m. assembly at Chase Manhattan Plaza—not with the building of barricades but with the making of art: a New York Fun Exchange, which begins at noon around the Charging Bull statue at Bowling Green, just south of Wall Street. Get ready, too, for the Michael Jackson flash mob.

Beyond Paris and the temptation to despair

For #occupywallstreet, dispersion is part of the plan