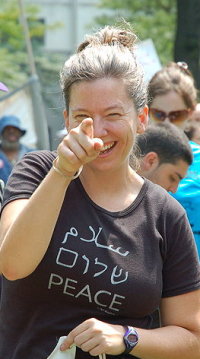 This is my debut column for Waging Nonviolence. After a long break from writing and publishing regularly, this seems like a good place to get my “land legs” again (or is it my web legs?). I have a lot of admiration for Nathan, Eric, Bryan and all the rest of the WNV folks, and am excited to be part of this project.

I don’t have a “beat” yet for my column. While I used to write a lot on militarism and the arms trade, I’m no longer working for the Arms and Security Initiative and not following those issues as assiduously as I did when it was my paid job. So, we will just have to see where this takes us. Tempted as I am to write about September 11th ten years on—to join my voice to the chorus (or cacophony) of remembrances—I will try and hold that for next week.

I finally got around to reading Sunday’s New York Times this morning (due to Hurricane Irene it was not delivered to my New London, CT apartment until after 8 a.m. on Monday). Of course, I flipped right to the Style Section and the Vows Column. But after getting my requisite dose of modern love and conspicuous consumption, a long opinion piece in the Sunday Review section grabbed my attention. “Give Pacifism a Chance” was written by Louisa Thomas, author of Conscience: Two Soldiers, Two Pacifists, One Family—A Test of Faith and Will in World War I.

Being the product of public schools (City Forever!), I know little about World War I save for the usual Archduke of Austria (right?) assassination business. And (confession time) despite being a member of the board of the War Resisters League (the venerable secular pacifist organization mentioned in Thomas’ article), there is much I do not know about the history of pacifism in my very own country. Notwithstanding, I finished reading the article and dutifully put a hold on Louisa Thomas’ book at my local library (thank goodness we still have those). Thomas’ great grandfather was Norman Thomas, a perennial socialist presidential candidate, member of the Fellowship of Reconciliation and conscientious objector to World War I along with his brother Evan.

The conscientious objector, as Norman Thomas wrote in 1917, is

persuaded that the supreme force in the world is Love and that Love can only win by its own weapons, which are never the weapons of violence. He is accused of ethical optimism, but he is too much of an ethical realist to preach to great armies the modern doctrine that they go out to kill each other with bayonets, bombs, big Berthas and poisonous gas in a spirit of love. He may believe in dying for one’s country, or for ideals; but not in killing for them.

The brothers certainly struggled and suffered for their country and their ideals. Evan was tried and convicted for refusal to serve. Initially sentenced to life in prison and hard labor, his prison term was eventually reduced to 25 years. He was freed after a successful appeal in 1919.

Once released, Evan campaigned on behalf of those who remained in prison. According to a POV Backgrounder accompanying the film Soldiers of Conscience, “Of the 450 conscientious objectors found guilty at military hearings during World War I, 17 were sentenced to death, 142 received life sentences and 73 received 20-year prison terms. Only 15 were sentenced to three years or less.” The sentences of all were eventually commuted after the war, but the brutality and isolation took its toll on these men.

Two other Thomas brothers—Ralph and Arthur—volunteered for service and fought in WWI in the army. This is the family story that Louisa tells, and I look forward to reading it!

All and all, the Fall of 2011 seems like a good time to be reading about the historic roots of pacifism. Not only is there is a crop of serious, scholarly and well-written books out there, but as the United States enters the 10th year of war against “terrorism,” peace activists need new ideas and new energy (at least I do), and perhaps mining our illustrious and difficult past is a good place to start. Also on my list (and in a neat stack on my living room floor) are the following books:

I also put a hold on Adam Hochschild’s To End All Wars: A Story of Loyalty and Rebellion (1914-1918) at the library, after reading his recent interview with Waging Nonviolence.

Off the cuff (by which I mean, without having read these or very many other books about historical opposition to war), it strikes me that there is a lot of loneliness and suffering between the dust jackets of each of these books. I don’t expect to see pacifism spelled out in shiny neon or atop a Broadway marquee in any of the books I have set aside for myself.

I have at least read most of Nicholson Baker’s Human Smoke: The Beginnings of World War II and the End of Civilization, and since that versatile and prolific author is experiencing a mini media hurricane these days (Baker, Baker everywhere), I will have to get it back from the person to whom I lent it and read it again. The book, as I recall, is dedicated to

the memory of Clarence Pickett and other American and British pacifists. They’ve never really gotten their due. They tried to save Jewish refugees, feed Europe, reconcile the United States and Japan, and stop the war from happening. They failed, but they were right.

Which reminded me of how Louisa Thomas’ New York Times essay ends:

[W]ar has a way of coming home, eroding our democratic culture as well as our safety. American pacifists of the past knew that, and we need people like them today: people who don’t believe war is inevitable, who will challenge what we assume and accept, and who will work to end it.

There you have it. Stirring and important words. Words to stake ourselves to. Words to work on. Pacifists were right (are right); the belief that war is not inevitable must endure. While it doesn’t exactly pay the bills, draw sellout crowds or result in many invites to fancy cocktail parties, it is something. In fact, it is better than the fruits of war: a heap of dead bodies, a tab of bi(tri)llions of dollars and the seeds of the next one flung into the four corners for the winds to sow where they will find fertile ground. Anyway, time to get reading.