Last Friday, the Federal Energy Regulatory Commission (FERC) held the final public hearing for comment on the draft Environmental Impact Study for the proposed Spectra Pipeline (or “The NJ- NY Expansion Project”). This will be a 30-inch diameter high-pressure pipeline that will bring methane (erroneously called natural gas) to New York City, entering Manhattan at Gansevoort Street after crossing under the Hudson River from New Jersey.

Over 300 people were in attendance as Occupy Wall Street joined concerned citizens to raise their voices in opposition.  Dozens of police surrounded the entrance to P.S. 41 on West 11th Street, as 160 citizens registered to give public testimony to FERC. There was time for only 80 people to speak during the meeting, which lasted 3 and a half hours. A number of OWS members wearing hazmat suits and gas masks walked the aisles of the auditorium. The crowd was supportive of the speakers, often shouting “let them finish” when the FERC committee tried to impose time limits. 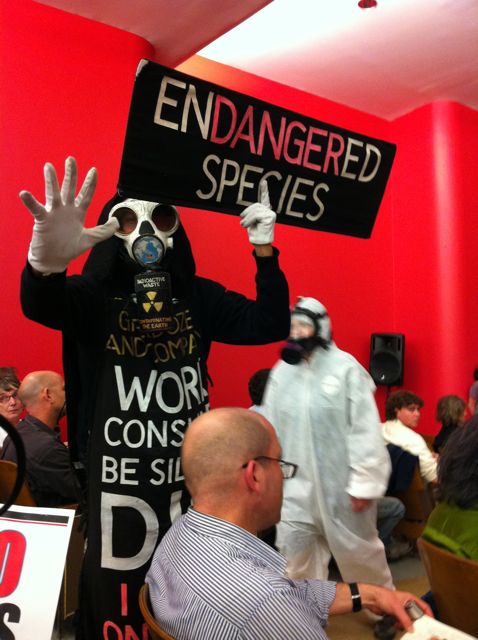 The reasons cited against this pipeline were numerous and varied.  Speakers drew connections between the proposed Spectra pipeline and the 26-inch San Bruno pipeline explosion in California last year that killed eight and leveled a suburban neighborhood. The threat of massive casualties posed by a similar incident, should there be a rupture of the Spectra pipeline in the highly populated and trafficked Meatpacking District, West Village and Chelsea neighborhoods, would be multiplied due to the lack of emergency care facilities on the west side of Manhattan, since the closing of St. Vincent’s Hospital.

Many spoke of the infrastructure build-out being a catalyst for fracking. It was pointed out that Mayor Bloomberg has opposed fracking in New York’s watershed, but is in favor of the pipeline, an obvious contradiction in policy. Indeed, the mayor has been a cheerleader for methane and has mandated policies that encourage the conversion of all city busses, power plants, and boilers to methane. Some were angry at City Council Speaker Christine Quinn, since this pipeline will enter her district. Her constituents felt ignored—upset that they had not been notified of this impending pipeline, and betrayed by her complicity.

It was noted that radon, with a radioactive half life of 3.8 days, would travel with the fracked Marcellus shale gas and be delivered right to NYC kitchens, as noted by Winslow Professor of Physics Emeritus of Hamilton College, James W. Ring, in a recent press release by the Sierra Club Atlantic Chapter. Next to smoking, radon is the most potent cause of lung cancer.

Spectra’s dismal safety record was brought up a number of times, as was concern over the lack of oversight and regulation during construction and operation. Laughably, only 7 percent of pipelines face mandatory inspection and inspection is only mandatory once every 7 years.  Even if those inspections occur, Spectra has been cited 17 times for inadequate operations and procedures and received the EPA’s 7th highest penalty rating on record for PCB discharge, among other violations and catastrophic accidents.

Since the pipeline will be run into lower Manhattan, the threat of terrorism was raised, an obvious issue since the pipeline would be buried only 12-48 inches deep. This pipeline will also be within feet of the south entrance to the High Line and the Whitney downtown, and within blocks of the Standard, Gansevoort and Jane Hotels. A children’s playground is within 300 feet. Additionally, this pipeline will run into Pier 53, the same location as the new NYC Fireboat house and docking location, complicating fighting a pipeline breach and fire from the river.

One of the main issues, brought up time and again, especially by members of OWS, was corporate disregard for citizens. The rush to allow multinational corporations to frack upstate despite environmental, health and safety concerns was mentioned, as was the fact that this pipeline is oversized for current and projected needs. This can only indicate that the gas is intended for export and has nothing to do with our “energy independence” as has been stated ad nauseum. The safety of citizens does not matter if that safety stands in the way of corporate profit. And unfortunately—as was pointed out—FERC, as a government agency, should be working to protect the citizens, but its true purpose is to approve pipelines and facilitate operations between varying corporations.

The belief that the hearing was a sham, or simply part of a procedural checklist before FERC approves the pipeline was brought up frequently. We can only hope that, as actor Mark Ruffalo pleaded in his statement, the members of the FERC panel will think with their hearts and truly understand what they are doing if they approve this pipeline.

You still have a very small window of time to raise your objections to this pipeline. Go to SaneEnergyProject.org for instructions on filing a comment, becoming an intervener or signing a petition.  The comment period ends October 31, 2011.

Jennifer Davis is a board member of Sane Energy Project and Superintendent of a large residential building in the New York City's West Village.

Ready for more interventions in Africa? Obama is