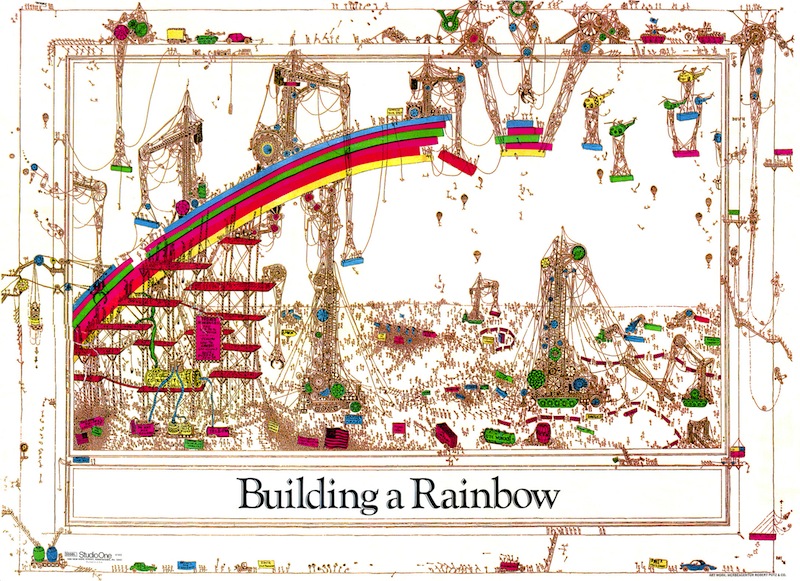 “Building a Rainbow” is the title of an old poster I picked up somewhere along the way. The rainbow’s swath of red, orange, yellow, green, blue, indigo, and violet layers is dazzling—and only half finished. In the picture, this symbol of peace is not an idealistic dream but something real. It is under construction, with a troupe of cranes carefully maneuvering sections into place, countless trucks and overworked paint wagons, scaffolding everywhere, and a flotilla of helicopters lumbering across the sky, each with its own precarious splotch of color dangling below.

We live in a violent world. But we also live in a world where a growing number of people everywhere are determined to confound the assumption that there is nothing we can do about this. They gamble that violence need not have the final word. They wager that there are options. They assert that we needn’t be victims of a cycle of violent history; rather, we can dare to be active subjects of a more nonviolent history that engages and transforms the violence around us. For them, violent history isn’t a given, it is made. So, too, is a nonviolent one.

The poster reminds us that this is not an easy task. We are building a rainbow, not simply hoping for one. It requires the kind of gumption and creativity only barely hinted at in the poster’s fanciful construction site. It means a profusion of projects, organizations, and movements offering plausible and effective options for the well-being of all. And it means slowly discovering that these innumerable initiatives do not exist in isolation but are part of a mysterious and self-organizing design: a rainbow in the making.

We only have to look around us to see this growing profusion. Countless campaigns and movements (for equality, democracy, peace, social justice and sustainability). New techniques (in nonviolent communication, restorative justice, trauma healing and anti-racism training). Research and education (on empathy, forgiveness, cooperation and conflict transformation). And all reinforced by an emerging worldview stressing the interconnectedness of the planet and its inhabitants.

Nonviolent Peaceforce is part of this creative profusion. 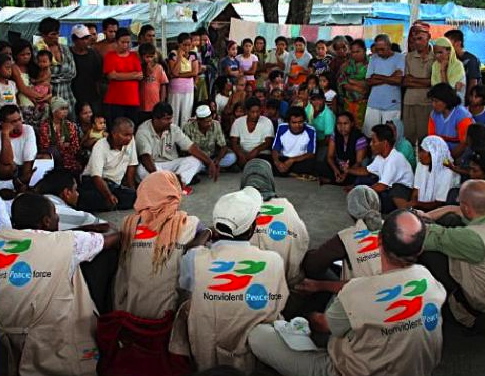 Ten years ago this week Nonviolent Peaceforce came into being. David Hartsough, a peacemaker who first got active with the Civil Rights movement as a teenager in the 1950s and has been at it ever since, had been thinking of something like this for many years: an unarmed civilian peacekeeping force able to respond in a timely and effective manner to crises that might lead to devastating armed conflicts and brutal violence.

Gandhi envisioned a Shanti Sena or “peace army,” which has inspired a number of “third party nonviolent intervention” projects and organizations, including Peace Brigades International, Witness for Peace, and Christian Peacemaker Teams. Moved by the work of these groups, Hartsough envisioned the emergence of an even larger and more comprehensive initiative.

While David Hartsough began ruminating on this idea in the early 1990s (we have know each other for years, and we would often talk about it together) it was only when he met long-time organizer Mel Duncan at The Hague Appeal for Peace conference in the Netherlands in 1999 that this idea got the traction it deserved. Almost immediately, the two began to build their piece of the rainbow. They crisscrossed the planet spreading this vision, finding collaborators and laying the groundwork.

In December 2001, they opened shop with the early task being to organize a strategic planning conference in Surajkund, India the following November, where Nonviolent Peaceforce would officially be launched. One hundred and fifty peacemakers from 49 countries showed up. I attended this powerful gathering with my Pace e Bene colleague Veronica Pelicaric, and led the opening ritual with Ouyporn Khuankaew, a long-time Buddhist feminist peace trainer and activist from Thailand. It was a dazzling experience spending this time with nonviolent practitioners from five continents hammering out this new project. One year later, in fall 2003, Nonviolent Peaceforce had its first team in Sri Lanka.

To transform the world’s response to conflict by promoting, developing and implementing unarmed civilian peacekeeping as a tool for reducing violence and protecting civilians in situations of armed conflict.

We envision a world in which large-scale unarmed civilian peacekeeping using proven nonviolent strategies is recognized as a viable alternative in preventing, addressing, and mitigating violent conflicts worldwide. Our primary strategy for achieving this vision is the creation of space to foster dialogue.

protects vulnerable civilians from harm and reduces violence in conflict-affected areas through the innovative methodology of unarmed civilian peacekeeping. We work with local groups committed to peace and partner with them to strengthen community security. We provide safe spaces for parties in conflict to meet each other and address their grievances. We hold the conflict parties accountable to the laws and agreements they have signed and help them live up to these.

Simply by being present and being visible, unarmed civilians can reduce the likelihood of violence or other serious human rights abuses. They do this by ensuring such actions do not happen in secret and with impunity. A more proactive presence involves analyzing the sources and causes of the violence and using international pressure to influence the behavior of armed actors. This can prevent violence even more effectively. By living and working alongside conflict-affected communities, building relationships of trust with all the key stakeholders, and engaging with those stakeholders directly and in confidence, experienced and well-trained unarmed civilian peacekeepers are able to help them see that it is often in their own best interests to take the moral high ground, to avoid abuses of and attacks on civilians, and to abide by the agreements they have signed and the accepted norms of international humanitarian law. This provides the maximum protection to civilians in conflict-affected areas and helps to prevent and reduce escalation of violent conflict.

Our activities have ranged from entering active conflict zones to remove civilians in the crossfire to providing opposing factions a safe space to negotiate. Other activities include serving as a communication link between warring factions, securing safe temporary housing for civilians displaced by war, providing violence prevention measures during elections and negotiating the return of kidnapped family members.

Two concrete examples illuminate Nonviolent Peaceforce’s work. In 2010, NP’s longest-serving peacekeeper Oloo Otieno, from Kenya, reported concretely on the power of unarmed peacekeeping in Sri Lanka, which had experienced decades of war. Twenty-six children had been abducted to serve as child soldiers by rebel forces. Otieno accompanied their unarmed mothers, who were intent on getting their children released, to the rebel encampment. As he wrote later:

With no threat of violence leveled against his forces, the senior-most rebel commander arrived to meet with the mothers and their nonviolent entourage. Our lack of arms earned the commander’s trust, respect and cooperation. He yielded with grace, apologized to the families, and ordered the immediate release of all 26 children.

This outcome was echoed some time later in his next posting in Mindanao in the Philippines, where he and his NP partners accompanied a woman to a military detachment where her husband had been detained after being arrested from a paddy field while at work. She had been afraid to take action, but emboldened by the presence of the NP peacekeepers, she made her case to the local battalion commander:

Within three hours, an impromptu community dialogue was convened by the barangay (village) captain and the battalion commander, who were on opposing sides of the hostilities. The commander explained the husband was suspected of belonging to a criminal gang recently spotted in the area. He apologized for the arrest and implored the community to report any suspicious people to the nearest military detachment. The terrified husband, just 22 years old, was released after six hours in custody.

In its first ten years, Nonviolent Peaceforce has been slowly developing a professional “peace service” in various parts of the world. We look forward to the next ten as it increases its infrastructure, reach and impact—and contributes yet one more important piece to the ongoing rainbow construction project.

Money and Occupy Sandy — a response from the Rockaways

An emerging force for peace