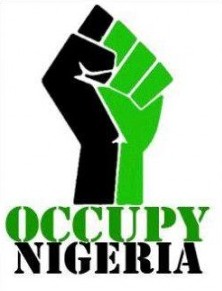 For too many expatriate Africans living in the West, the phrase Occupied Nigeria raises scary images of U.S. or NATO warships bearing down in AFRICOM-commando fashion, reestablishing Eurocentric hegemony over the worlds’ fifth largest supplier of crude oil. Before these early days of 2012, we had barely heard news of the spreading Occupy hashtag on the continent that helped re-popularize mass nonviolent civilian resistance around the world last year. Now #Occupy Nigeria in just two short weeks has mobilized thousands in cities across the diverse West African country, along with support demonstrations (including some of those ex-pats) in London, Los Angeles, New Jersey, and elsewhere. The widespread strike by Nigerian oil workers continues to grow, as calls for an end to economic and political corruption gain momentum.

The short-term issue which birthed the network now being called Occupy Nigeria was the hastily-announced January 1, 2012 end of the federal fuel subsidies which had enabled average Nigerians to afford gas pumped from oil reserves on their own land. This resulted in an overnight 120 percent price increase, and an outburst of fury at decades of governmental collusion with the multi-billion dollar oil industry. The initial demands of the movement—to simply return to the status quo before 2012—were quickly followed up with calls for an end to the nepotism of politicians and an improvement in infrastructure. By the end of the first week of local protests, Nigerian police had killed at least ten activists, and a call went out for a nationwide, indefinite strike which would halt the Nigerian economy. Many mainstream professional associations joined the call, including the Nigerian Labour Congress and the Petroleum and Natural Gas Senior Staff Association. Ongoing and intensified shut-downs promise to paralyze international oil supplies.

The fact is, for many long-term observers, there are no surprises here; Nigerian society may be crippled by the violence of multinational greed but has long been a staging ground for peaceful resistance to the neocolonialism of oil companies and their foreign profiteers. Nigerian educator Judith Atiri, in our recently published Seeds Bearing Fruit: Pan African Peace Action for the 21st Century, testified to the “fertile soil and inspiring possibilities” deep in the history of Africa’s most populated nation. Early examples of creative anti-colonial challenges included a popular tax resistance campaign in the 1920s, and a series of general strikes throughout the 1940s. After independence in 1960, protests became more localized and region-specific with the discovery of oil and movements for secession taking center stage. It was quickly evident that direct British colonization had been replaced by the all-consuming power of the empire-building multinationals. The 1990 coming together of nine separate associations of the indigenous Ogoni peoples of the southeast set the stage for modern Nigerian resistance.

The Movement for the Survival of the Ogoni People (MOSOP), it should be remembered, was a coalition demanding both control over natural resources as well as general self-determination. Their Ogoni Bill of Rights gave a detailed set of demands for a greater share of the oil revenues amongst all the people of Nigeria, greater national attention to environmental clean-up, and greater political participation and transparency. Though the multinational oil companies and the Nigerian federal government ignored these demands, protests continued with intensified issues raised: that the Ogoni people have a right to refuse further oil production on their land, and that reparations be paid to make up for centuries of colonial theft. By 1995, MOSOP and their supporters were able to successfully shut down several plants, an act now being repeated by the Occupy movement. Nigeria’s infamous response was swift: MOSOP leader Ken Saro-Wiwa and eight of his colleagues were hanged by the state. Though Ogoni leaders noted that MOSOP and all the peoples of the Niger Delta region were “barricaded by excessive violence” throughout society, and even tempted by violence, they remained a movement committed to nonviolent social change.

Though conflict and violence has been characteristic amongst many competing groupings in the Niger Delta, with disputes over political representation, work contracts, land issues, and personal rivalries, the overall struggle for unity against corruption and greed continues to take peaceful forms. Women have always been active and leading participants in Nigeria’s freedom campaigns, but the initiatives of the past decade have seen more specifically women-led campaigns than ever before. Nigerian legal scholar and conflict resolution practitioner Ifeoma Ngozi Malo wrote poignantly about the 2002 waves of protest against Chevron-Texaco, where women seized control of several oil terminals, with no ensuing violence. “Armed with only food and their voices,” Ngozi Malo explained, “these village women carrying their children on their back occupied the various oil facilities and the terminals for weeks. They barricaded a storage depot, thus blocking docks, helicopter pads and an airstrip, which covered all the entry points to their facility. Their presence prevented well over 700 workers from working or leaving the premises until the company agreed to certain conditions.”

Part of the successes of these campaigns can be explained by the “shaming” aspect of women’s power in Nigerian society. With strong social bonds in a society where cultural traditions are taken very seriously and honored, a simple dance can have greater impact than an apparently militant protest with angry placards. During many occupations of the past several years, dances were specifically developed to ridicule the unjust practices of local, regional and international businessmen. Using embarrassing songs with satirical and sardonic lyrics, these women-led actions have had lasting effects on their communities. Even in cases where corporate promises were quickly broken, the power and possibility of nonviolent direct action and occupation was fused into the consciousness of civil society.

Perhaps the most unique and ingenious tactic of the modern Nigerian women-led movement has been the threat of nakedness. With its roots in traditional protest amongst the peoples of eastern Nigeria, public nudity symbolized a “permanent curse” of political, economic and physical impotence for the men before whom women were provoked to disrobe. Never taken lightly, contemporary instances of the threat are carefully woven into strategic thinking about escalating campaigns. Warnings are always given by the women, and negotiations often take place before a public disrobing is deemed necessary. It could be said that the idea of public nudity and shaming still strikes fear into Nigeria’s body politic. In any case, clothed or not, it is clear that nonviolent tactics are far from new to Nigeria’s large, heterogeneous, neocolonial society.

How Brexit is an opportunity for a more just Britain