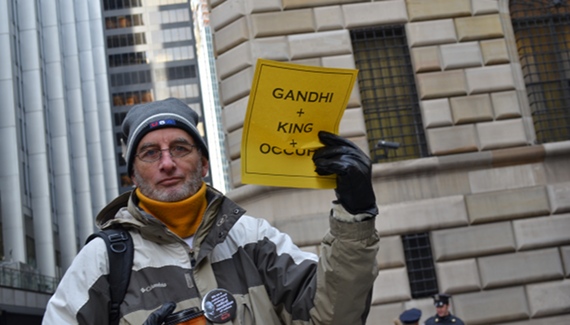 The Occupy movement celebrated Martin Luther King, Jr. Day in force. There was a worldwide candlelight vigil on Sunday night, and then, on Monday, nationwide protests in front of Federal Reserve locations under the banner of “Occupy the Dream.” With the moniker “Occupy 4 Jobs,” protests in four East Coast cities called for a new initiative to counter unemployment. In New York, the vigil was a celebrity-studded success; the next day, Occupy the Dream attracted a lackluster showing in the morning cold. The several hundred who turned out at Union Square to Occupy 4 Jobs made their point by way of a maddening, roving sparring match with the NYPD, by the end of which protesters had distracted themselves from the banks and stores they were targeting with vicious verbal assaults on their police escort. What force they mustered, really, became diluted by fury.

This kind of behavior is not an exception carried out by an errant Occupy copycat, but the rule for the movement as a whole; we at Waging Nonviolence have contended with it again and again. Eventually this movement needs to grow out of its debilitating reactiveness, to grow up, to learn discipline, and to realize that its real power begins where this kind of mayhem ends. I think King would say so too.

By the time I arrived at Monday’s Occupy 4 Jobs rally for its announced 1 p.m. starting time, people were already gathered at the steps of Union Square around a brass band. It was a somewhat more colorful crowd than most Occupy events, ethnically, though there were a good number of regulars too. Jersey City-based organizer Monica Moorehead explained to me that Occupy 4 Jobs is “independent from the Occupy Wall Street movement, but inspired by it.” As I approached the rally, I met several offers to take a free socialist newspaper. “Young people don’t have hope under capitalism,” Moorehead added.

The police presence was far heavier than what I’d seen that morning downtown at the Fed; cops seemed almost as numerous as protesters. By 1:45, a march was called, and off it went, circumambulating Union Square’s busy sidewalks counterclockwise alongside motorcycle police, vans, commanders and Community Affairs officers in friendly blue windbreakers. I asked one officer why there were so many of them. “I just go where I’m told,” she replied, with a smile.

After one lap around the square, the march came to the Bank of America ATM storefront at the corner of 14th Street and University Place. Several protesters entered with signs, while the rest picketed out front. (“What do we want? Jobs! When do we want it [sic]? Now!”) About a dozen police officers followed. For almost 20 minutes, the police kept the storefront open, allowing customers to use the ATMs. Metal barricades were brought in to surround the picketers and keep a section of the sidewalk clear for pedestrian traffic. (Picketers: “We! Are! Pedestrian traffic!”) When four of those who’d entered the storefront were arrested, those outside started singing “We Shall Overcome”—certainly a Kingian moment. But as police ushered the arrestees outside and past the crowd, the protesters themselves were overcome. They started shouting, as is common Occupy practice during an arrest, “Shame! Shame! Shame on you!” And “Your pensions are coming soon!”

But “shame” for what? The protesters were conducting an act of civil disobedience by attempting to occupy bank property. Surely they expected to be arrested. The police officers carried out their orders with far less shouting than the protest directed at them, taking care to ensure the whole thing was as orderly as possible. The protesters seemed intent on making it a mess.

One older man holding a cane and looking disturbed was caught in the ensuing scuffle, and several officers led him to one of the locked glass doors of the bank and began to arrest him. “Let him go!” some in the crowd chanted. A higher-ranking officer came to the scene to investigate. He quickly told the others to stand down, and to hand the man back his cane, and the man was indeed let go. Another point for the cops.

After Bank of America, the march continued on past the Whole Foods and toward the Chase location on 14th and Broadway. Seeing it completely surrounded by police (“Who do you serve? Who do you protect?”), they turned back to the Whole Foods, which several of them entered while chanting against the company’s labor practices. As police tried to drive them away from the store’s entrance and to keep part of the sidewalk clear, the marchers moved east, passing the Chase bank. They stopped in front of Walgreens, and then Trader Joe’s, decrying these businesses’ labor practices as well. (Policeman: “Are you union busters?” Flustered Trader Joe’s employee, standing outside: “Um, no.”) At each stop, police warned them to keep moving or be arrested. The marchers escalated their insults.

The police were shouting and barking orders and intimidating people; some of them were being outright jerks. But this kind of sloganeering made them actually look pretty good. As is the usual and questionable NYPD tactic, police were out in overwhelming numbers, and the protesters let that tactic get them all worked up. The NYPD has learned something since its early incidents of mass arrests and hideous abuse of pepper spray with Occupy. Protesters, evidently, have not. They use the same chants and insults that only carry the situation beyond their control and surely make any bystander—read: potential supporter—hope that the comparatively placid police officers will protect her or him from this vicious mob.

Which makes one wonder. What, instead, would Martin Luther King, Jr. do? How would he want his holiday celebrated?

King was constantly speaking out against police brutality against black communities. He experienced plenty of it himself. But he refused to turn the insults that police directed at him and his movement back against them. “To meet hate with retaliatory hate would be both impractical and immoral,” he wrote. “We must meet the forces of hate with the power of love.” Under conditions of police repression far more brutal than what the Occupy movement has experienced, he was always guiding his followers not to fight back in word or action. If they did, he knew, they risked turning the public against them. Civil rights leaders, he stressed, “have a responsibility to maintain discipline and guidance that no one is able to confuse constructive protest with criminal acts, which all condemn.”

After black protesters threw rocks at police in Albany, Georgia, in 1961, King declared a “day of penance” that put demonstrations on hold. He called for supporters “to pray for our Negro brothers who have not learned the way of nonviolence.” The nonviolence he’s talking about is not passivity or cowardice. It’s courage, unalloyed. When you exude calm and dignity while taking radical action, the violence directed against you looks all the more monstrous and absurd, and the justice of your cause shines through.

Learning to do this takes discipline. As Mary King wrote over the weekend, Martin Luther King always advocated James Lawson’s workshops in nonviolent action, and he would be sure to arrive at them early himself to stress their importance. He tried to make sure that as many people as possible who participated in his marches had gone through such training, which taught them how not to retaliate against clubs, fire hoses and dogs. The Occupy movement, which faces much less police abuse, needs to go to school like that.

There has been a growing discussion in the movement—growing since the first day, though with little result—that the usual style of protest actions needs to change. “I want us to challenge what it means to be badass,” said one woman at a recent meeting of the feminist bloc in Occupy Wall Street’s Direct Action Working Group. She and others felt it’s time to “find ways of doing direct action without it being so fucking macho.” They’re sick of what they see in the news reports about the movement—“it’s usually just men confronting the police.”

Too many people taking the streets as part of the Occupy movement have come to think, if they’re thinking at all, that their strength is in their rage. But it isn’t. Their strength has always been in their courage—the courage to think big, to take public spaces, and to create the glimpse of a better world within them. Rage has always been a weakness. Those in the movement who perpetuate the repertoire of fits and tantrums implicate everyone else in it too, as those at the feminist Direct Action bloc well know. King would stand in solidarity with such anger, as he did even with rioters, knowing that it comes from an honest sense of injustice. But every day that those setting the mood for these marches refuse to learn discipline, and even love, they take that shared cup of solidarity and spike it with poison.

‘Shame! Shame!’: What would King say to Occupy?