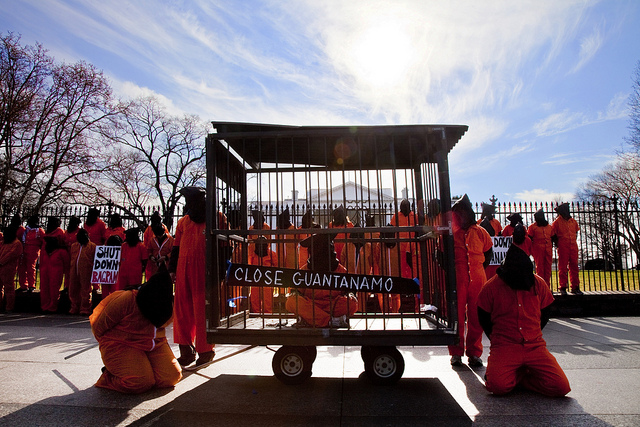 I woke up early this morning to cook breakfast for what remains of the Witness Against Torture community. After almost two weeks, it was the first time one of us had cooked for each other, and as I sat down to reflect on our time here in Washington, D.C. for the “Hunger for Justice” campaign that so many have participated in, I find myself looking forward to be able to take a break. Most of my writing, time, organizing and reflection have dealt with some aspect of torture or detention and, to be honest, I have grown weary. I miss the work on the farm. I miss family and community. I miss being able to walk through the woods or enjoy a quite cup of coffee while reading esoteric political philosophy. And then it dawns on me. Those desires I yearn for and enjoy are the reason I am part of Witness Against Torture (WAT).

I had very little hesitation pulling the black hood over my eyes as I approached the White House sidewalk with almost 40 other Witness Against Torture activists yesterday. As a community, we were on day ten of a liquids-only fast and had plans to break it with a communal meal that evening. But there was always the chance that most of us would end up in jail for an uncomfortable night of restlessness, hunger, and stress and delay the breaking of our fast until morning. Still, the thought of a couple days in jail in exchange for a visible act of resistance to U.S. policies of torture and detention and an expression of solidarity to the men in Guantánamo was worth it.

We pulled our cage with a “Guantánamo prisoner” onto the sidewalk and we spread out—in the infamous orange jumpsuits and black hoods—along the pristine yet protective fence that secures the sanctity of the White House. The police quickly informed us that we were not welcome and that we had to disperse and move the cage. Some of us sat down around it, making clear our intention that we would have to be forcibly removed. The day marked the start of Guantánamo’s eleventh year and followed the January 11th day of action—the largest-ever protest against the prison and issues of indefinite detention, including the recent passage of the National Defense Authorization Act (NDAA).

After three hours on the cold sidewalk, the police began making arrests. We were assigned identification numbers, photographed, and detained in police cruisers and holding cells for a few hours before being released with a notice to appear in court in early February. All things considered—especially with the prisoners of Guantánamo weighing heavy on our hearts—it was a cakewalk. The mild discomfort of fasting, hours in plastic handcuffs, metal seats, and a rough ride in the back of a police van pale in comparison to the indefinite detention of innocent men and the physical and psychological torture they have received. Lawyers for the men in Guantánamo communicated to us that their clients were going to hold a three-day hunger strike. According to our friends at the Center for Constitutional Rights:

multiple clients have told counsel that the men at GTMO were so moved to find out that we were planning a big public demo that they have decided to try and hold a peaceful protest in solidarity *with us* and to protest the ongoing injustice of 10 years of indefinite detention at GTMO! We know there is buy into this among the men at Camps 5 and 6. Camp 6 is communal and there will be hunger strikes and peaceful sit-ins, with signs prepared. Camp 5 is more restrictive, so no communal sit-ins, but a protest involving a refusal to accept food for 3 days. The men informed camp guards about their intentions and reasoning on Monday night, and aim to peacefully protest on Jan 10, 11, and 12. We won’t know in real time if they were successful or were stopped — but we know that men on every cell block in camp 6 will seek to do this, and that men in Camp 5 will participate as well.

Of course it is we who are acting in solidarity with them. It is their plight we wish to draw attention to. It is their imprisonment we condemn. Our fast was an expression of our repentance for their continued mistreatment by the hands of a government that is supposed to represent us. Our protest, direct action, and civil resistance are our attempts to bring the illegitimacy, illegality and shame of Guantánamo and indefinite detention back into public purview for condemnation and closure. Our own brief detention and experience in the “justice system” is our meager expression of solidarity for their profound experience of prison and contrived courts and military tribunals.

The police released us just in time for us to break the fast together, but they kept our cage. All in all, it was a good couple of weeks of community, education, protest, media coverage, outreach, coalition building and nonviolent action. Interestingly, the fast has weakened our bodies but strengthened our resolve. We have another trial date—which is more than those in Guantánamo or Bagram can say—so our efforts continue. But the prison is still open and we—as a people and a nation—are perhaps in a worse-off political situation than we were a year ago. The political winds shift easily, but it seems unlikely that Guantánamo will close anytime soon. Meanwhile, the legitimacy of torture and unjust and inhumane detention practices are less scrutinized and more accepted than they were a decade ago.

Professor Juan Mendez, the UN rapporteur on torture and himself a survivor of torture, confirmed the bleak political reality for closing Guantánamo as we shared our first meal with him and members of the National Lawyers Guild chapter at American University School of Law. But the resistance is growing and the realization of our interconnectedness is deepening—especially at the grassroots level as evidenced by the Occupy movement’s protests against NDAA and the historic coalition of human rights groups on January 11. The new Close Guantanamo project has brought together a diverse group of individuals and communities to help facilitate the kind of knowledge that translates into action. When lawyers for the Guantánamo habeas cases took the stage at the January 11 rally, hundreds were voluntarily engaged in fasting and hunger strikes. Thousands more were engaged in protests around the world and we caught a fleeting glimpse of what a world united against torture might look like.

Looking forward, Witness Against Torture is asking itself what to do next. 2012 is a presidential election year and it is unlikely that politicians will willingly engage in questions regarding torture, detention or Guantánamo unless there is significant public pressure. Anti-torture and civil liberty groups have a lot of work to do in the public realm to raise awareness, educate and mobilize citizens. The upcoming trial date will be another opportunity to “put” Guantánamo and the NDAA on trial both in the courts and with the public. The coverage by mainstream media of the tenth anniversary of Guantánamo—in large part generated by our activism—is promising, as are the many op-eds calling for its closure.

WAT has grown tremendously since 25 people traveled to the Cuban prison to fast in 2005. Still, as a community we are asking ourselves what more can we do? In the coming months, in addition to preparing for our trial, we will take some time to think critically about what are the next steps necessary for closing Guantánamo. The fact that many of the prisoners at Guantánamo are encouraged by our actions helps us understand our work as having some effect—not the one we or the prisoners hope for—but worthwhile nonetheless. The American detention regime is complicated by both political and legal issues but never before have the issues of detention been so much in the spotlight. Regrettably, the passage of the NDAA reflects the difficult situation we are in. But with creativity and commitment Witness Against Torture’s work with grassroots activists to challenge the Guantánamo narrative will continue in whatever fashion we can. There will be conference calls and retreats, between now and next January to evaluate our past and plan for the future. Meanwhile the vigils, teach-ins, speak-outs, interviews and direct action will continue—always hoping but never knowing—until that tipping point to close Guantánamo is reached.