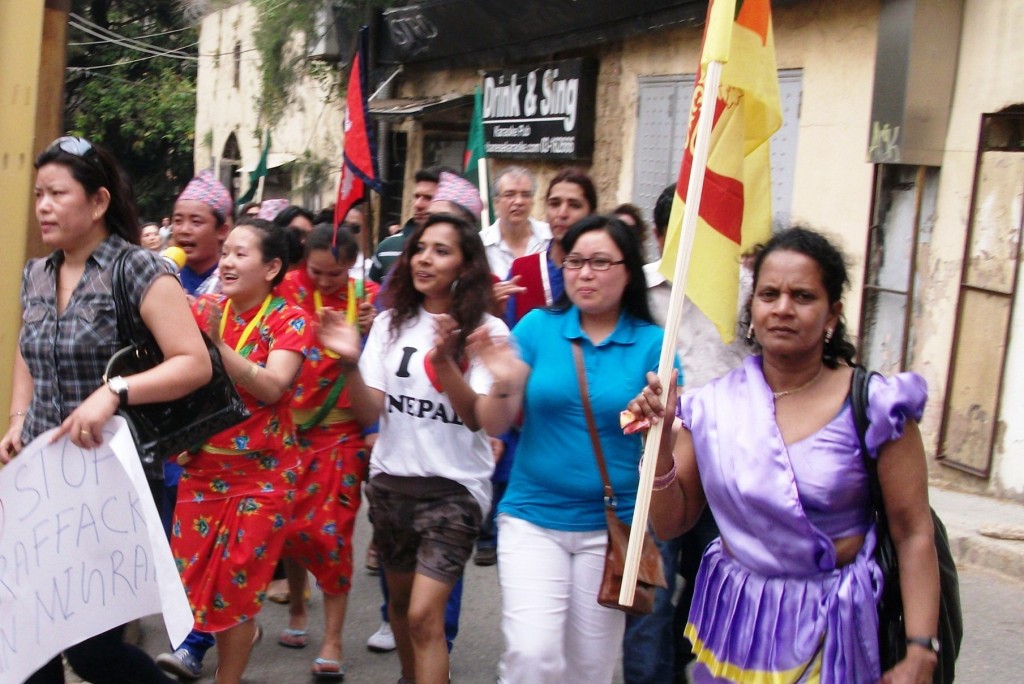 There are over 200,000 migrant domestic workers living in Lebanon today — a large number when you considered that Lebanon’s population is only a little over 4 million. Most migrant workers live with their Lebanese employers, cleaning their houses, washing their clothes, cooking their food and looking after their children. Yet these workers are not included under Lebanon’s labor laws — they are not entitled to basic rights such as minimum wages, maximum working hours, and holiday or sick pay. Many never get a day off. Those that do are often not even allowed to leave their employers’ houses.

The suicide last month of Ethiopian domestic worker and mother of two Alem Dechasa, who was publicly beaten in front of the Ethiopian embassy she had been trying to escape to for help, caused a wave of outrage around the globe after a film of the beating was circulated. But hers is by no means an isolated case.
According to a report by Human Rights Watch migrant domestic workers in Lebanon are dying at a rate of more than one person a week. The report revealed that many of these deaths are suicides; most of the rest are accidental deaths caused by workers falling from high buildings while attempting to flee abusive employers.

Last Sunday over 1,000 people gathered in Beirut in a march organized by the human rights watchdog Anti-Racism Movement, along with the migrant workers’ communities and several non-governmental organizations, among them the Danish Refugee Council, the Insan Association, the Nisawiya women’s rights group, and Pastoral Care of Afro-Asian Migrants.

The event was intended to raise awareness of migrant workers’ unfair treatment and demand improvements to their situation, in particular that migrant domestic workers be included under Lebanese labor laws and the abolition of the kafala, or sponsorship system which ties workers to a single employer. The event, also intended as a celebration of Labor Day, was held two days before the national holiday since most migrant workers get only Sundays off — if they get time off at all.

The march was followed by a cultural celebration in which migrant communities from Sri Lanka, Nepal, Cameroon, India, Madagascar, Sudan, Ethiopia, Kenya, the Congo and the Philippines performed dances and served traditional food. Domestic workers from Nigeria, Sudan and several other African and Asian countries were also in attendance, along with Lebanese and international activists and supporters.

The sponsorship system in Lebanon means that migrant workers’ immigrant status in the country is dependent on them working for a single employer who is legally responsible for them. As a result the majority of domestic workers live as well as work in their employers’ homes “for their own protection,” leaving them subject to human rights abuses. These commonly include confiscation of their passports and other papers, restriction of movement — the majority of employers do not allow workers to leave the house or even make phone calls — late payment or even non-payment of wages, no restriction of working hours, as well as physical, sexual and verbal abuse.

The system makes it extremely difficult for migrant workers to seek legal aid. They are not allowed to leave the country or change employers without consent from their sponsors, who often demand enormous sums of money to return their documents. If they leave their employer, even under abusive conditions, they automatically lose their immigration status in the country because the kafala system legally binds them to their sponsor.

Workers from a large number of communities came together to promote their common cause in Sunday’s march, carrying signs which read “Stop human trafficking of migrant workers in Lebanon,” “When will we start criminalizing racism?” and “Workers not slaves.”

“The migrant workers make an important contribution to society and to the individual households,” said Pendaline Pinero, a Filipina community leader. “Their work should be recognized by the government. They should be part of the labor law.”

The atmosphere in Sunday was festive, as crowds gathered to watch traditional dances, eat, drink and celebrate the attendance at the peaceful protest.

In spite of the difficulties they face, however, the domestic workers attending Sunday’s event were the lucky ones — those who have time off and are allowed to spend it outside their employers’ houses.

A 2011 report on human trafficking in Lebanon by non-governmental organization and women’s rights group KAFA, quoted excerpts of telephone interviews with domestic workers unable to leave the house, many of whom are still working in Lebanon, but unable to attend events such as Sunday’s march.

“I cannot leave my employer’s house and I cannot even call my family,” one Filipina worker told KAFA, while an Ethiopian worker said: “I was beaten by my first sponsor and sexually harassed by the next one. I worked long hours and did not get proper food.”

Another Ethiopian worker reported: “I have been working for one year for my employer, but he has paid me only $500 so far. When I asked for my salary once my sponsor hit me. I want to change my employer. But I don’t know how. I don’t know how to get help.”

While Sunday’s event was a step in the right direction there is still a long way to go. NGOs such as the Insan Association and KAFA hold peaceful demonstrations in Beirut on a regular basis, aiming to raise awareness and increase pressure on the Lebanese government to make some much needed changes to the current situation.

Rola Abi Mourched, program coordinator at KAFA, said Thursday that the government has yet to respond to Sunday’s protest. “We’ve been having meetings with different stakeholders and ministers,” she said. “The next step is to continue putting pressure on the government and raising awareness to encourage the public to support these changes… We plan to continue putting pressure on the Lebanese government by conducting individual meetings with decision makers to advocate for alternatives to the sponsorship system.”

In February KAFA held a public discussion with the former Minister of Labor, Dr. Charbel Nahhas, who announced that he had submitted a number of suggested amendments to the labor law to the government before his resignation earlier that month. These include changes which would require domestic workers’ salaries be paid into a bank account subject to scrutiny to ensure wages are paid in full, that a translator be present when workers sign a contract at the Ministry of Labor, and allow workers to terminate their contracts through a notification system.

Prior to his resignation Charbel had announced that he would look at abolishing the sponsorship system, stating that migrant household and agricultural workers should be included under the labor law. “Any law that takes into account the nationality of workers,” the former minister wrote on Twitter, “is tantamount to racial discrimination.”

Charbel’s replacement as labor minister, Salim Jreissati, has yet to announce any plans to put an end to discrimination against migrant workers.

A leaflet published by the Insan Association and its partner AIDA states: “Much more needs to be done. Migrant domestic workers need to be able to socially integrate into Lebanese society and enjoy their rights as full citizens in this country.”

India Stoughton is a freelance journalist currently based in Beirut, with a degree in Arabic and Middle Eastern Studies. She is a regular contributor to the arts and culture section of Lebanon's Daily Star, has traveled extensively in the Middle East and in her spare time continues her battle to master the Arabic language.