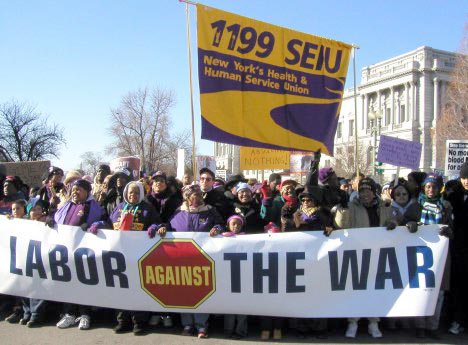 But this column is about working class politics. Let’s start, therefore, by distinguishing between “politics” and “elections.” For at least two big reasons, elections don’t teach us much about the political wants of workers.

During the Great Depression the Democratic Party led by Franklin Delano Roosevelt did become the party of hope for workers, since it delivered substantially: Social Security, the Works Progress Administration and a favorable climate for unionization. The Democrats did that under enormous pressure from worker and small farmer movements that used widespread nonviolent direct action. Ironically, the historical memory attached to the 1930s and 1940s wasn’t the success of direct action but instead the effectiveness of the ballot box. And Democrats got the credit.

But that was long ago and far away. The Democrats have betrayed workers many times since. They failed to pass universal health care under Truman and failed to repeal the 1947 Taft-Hartley Act, which was a direct attack on organized labor. They betrayed white workers by deciding in the 1960s to fund the black-oriented War on Poverty from working class taxes instead of taxing the rich. More recently, we had working class boy Bill Clinton as a grown-up presidential candidate, promising labor to oppose the North American Free Trade Act (NAFTA) — and then, after a meeting with Wall Street, reversing himself. Clinton went on to champion the attack on the poor known as “welfare reform.” No one can quantify the amount of worker suffering caused by these two betrayals by one of their own. It might seem, therefore, that the working class people who don’t vote at all are actually the ones voting in their own interests!

But a lot of working class people vote anyway, despite a two-party arrangement rigged against them. My mention of President Roosevelt suggests one reason why, and I suspect that it’s rooted in people’s work life.

All of us who have worked in factories or other blue collar jobs, as I have, know that there are bosses and then there are bosses. Some are better than others — a bit more human, flexible and respectful, looking for a way to make a hard job easier. For those of us who chafe in routine and mechanical jobs, if that’s a job we need to take now, we prefer one with a decent boss.

Like bosses, politicians are not all the same. President Franklin D. Roosevelt seemed to “get it.” He communicated to my dad a commitment to easing our lot even within the limitations of a depressed and depressing capitalism. Thus, working class people can develop preferences for one candidate over another and still hold an overall cynical view of elections and expected performance. They are not as likely as middle class people to project “savior” fantasies on candidates.

The vulnerability of middle class people to political infatuation reminds me of a parallel racial difference regarding President Obama. All the black people I know have been steadfastly loyal to him. That’s because they were realistic about our system. They didn’t join a romance with Superman Obama, and so could skip the disillusionment that afflicts so many white people I know.

Ronald Reagan attracted many working class people, and I learned something about that when in 1984 the Jobs With Peace Campaign ran a referendum in a number of counties in Pennsylvania. Reagan won the state decisively. At the same time, we won our referendum by larger percentages than he did, with the proposition that the government should shift spending from the Pentagon to infrastructure, housing and other human needs — the opposite of Reagan’s stance!

We did exit polling. This was a typical interchange:

“Who did you vote for as president?”

“And how did you vote on the Jobs with Peace question?”

Then, noticing my hesitation, the voter said, “Well, Reagan is a good man and a good leader, but you know he’s wrong about some things like out-of-control military spending, and in our state we really need that money for schools and stuff like that.”

In short, our electoral system is not set up to assist us to know what’s really going on inside voters’ heads; it forces choice among candidates, not values or directions or concrete programs. Just because candidates claim a mandate for this or that program doesn’t mean we have to believe them.

That conclusion ignores differences in class styles. Compared with middle class people, working class people are usually more demonstrative. They are also more likely to have family members serving in the military.

During the Vietnam war, polls indicated that the educational demographic most opposed to the war was people who had not finished high school. College graduates were overwhelmingly for the war until late in its terrible course.

To my knowledge the first national, mass membership organization to come out against the Iraq war was the AFL-CIO. Then, last year, they did it again, calling for a return of U.S. soldiers from Afghanistan. I know of no parallel action taken by national mass membership middle class associations.

The next time we see flags in neighborhoods, we might ask ourselves the style question. If 100 flags fly in a working class neighborhood of 1,000, there might be 600 households who are actually against that war, while in the no-flag thousand-home middle class neighborhood across town a large majority might support the war. Middle class people just aren’t so much into flags!

How, then, can middle class people learn about working class political attitudes? One option is to get to know a variety of working class people and ask them. Another is to find out what working class organizations are taking a position on, like the AFL-CIO. Another is to read stories like mine about longshoremen refusing to load weapons for war and other stories of workers acting sacrificially for their values. Still another source is to read polls, although a frustratingly large number of polls that note gender and race and age don’t note class.  And if they do, what’s their definition of “class?”

Of course, race may reveal something about working class attitudes, since such high proportions of African Americans and Latinos and indigenous people are working class. I remember a flash poll done after the United States invaded the Caribbean island of Grenada in 1983. While about 70 percent of the overall public approved, the number was reversed among black people: about 70 percent opposed.

Then there’s a kind of macro-historical way of weaning ourselves away from the classist conditioning we all experience, which amounts to conditioning against working class people. To counteract it we should ask: Had it not been for working class movements, what would our society be like? We should ask: In Sweden and Norway, where the working class took power and set the direction for a democratic society, what were the results?

In today’s United States we can ask, if the battered labor movement were not still a progressive force, then why is it so important to Scott Walker and the rest of the 1 percent to destroy the unions? The answer to that might lead more middle class activists to become allies of the class without whose politics our country would be a nightmare.