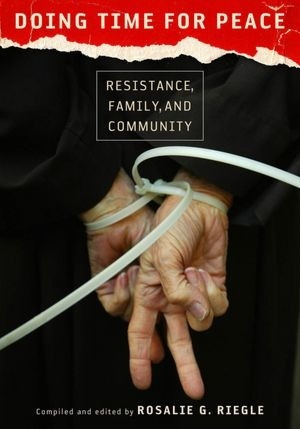 Every once in a while, I come across a book that is so good I wish I had the idea first. Rosalie Riegle’s Doing Time For Peace: Resistance, Family and Community — an edited volume of interviews with peace activists who have spent time in jails and prisons as members of families and communities — is that book for me right now.

It reads like she had a great time doing the project, which is based on nearly 200 interviews over a three year period. Rosalie Riegle has a light touch and did heavy edits. In the introduction, she writes that she followed the lead of the great oral historian Studs Terkel in applying a sharp knife to the ums and ahs and circular speech that stud people’s speech as they think through and answer a question. The result is clear voices, thoughtful responses and riveting stories. Riegle knits the interviews together with her own words and explanations so that the readers can see how one resister inspires and motivates the next.

The chapter on the Berrigans is entitled, “Let’s Do It Again” (a hilarious and also sort of terrifying title) and includes interviews with my sister, brother and myself. My sister Kate, who is now doing a doctorate in physical therapy in Philadelphia, was asked: Was it all wonderful at Jonah House (the resistance community where we grew up)? “No, it wasn’t,” she said. “It’s hard when there’s a lot of people in a relatively limited space… personalities clash and people need space and time to be alone.”

Some of the names in the volume will be familiar to students of and participants in the U.S. peace movement, but there are no superstars here. These are men and women doing the hard work of raising families, building communities and being resisters — and they admit that it is not easy.

The chapter on the Plowshares movement is particularly interesting. Sister Anne Montgomery and Father Carl Kabat were two members of the first Plowshares action, a symbolic disarmament of nuclear warheads in Pennsylvania in 1981. Since that time there have been more than 100 of these actions in the United States and throughout Europe.

Sister Anne, who died last year at the age of 85, shares that the Plowshares Eight “was sort of a shocker to many people, both outside the peace movement and in, because it was the first time we’d actually taken hammers to something. Some people consider the destruction of so-called property ‘violent.’ I think Dan Berrigan gives the best one-sentence definition of property: ‘Property is what enhances human life.’ If it kills human life, it’s not true property, because it’s not what’s proper to human life.” Right On! This is decades before Occupy and the contentious debate between nonviolent activists and those committed to embracing a “diversity of tactics.”

While the chapter includes a number of Plowshares voices (repeat offenders and one time actors), there are also thoughtful critiques of the movement from respected voices within the peace movement. Jim Forest, a member of the Milwaukee 14 draft board action and a peace activist now living in Holland, told Riegle, “For me, disarmament is when a person who has a weapon puts it away, melts it down.” He says that talking about symbolic “acts of disarmament” is “just American hype.” The real question for him is “how do we change? How do we become a converted people?”

These are questions the Transform Now Plowshares is trying to answer. The trio — Sister Megan Rice, a nun in her 80s along with Catholic Workers Michael Walli and Greg Boertje-Obed — cut through fences at the Y-12 Security Complex in Oakridge, Tenn., one of most secure sites on the planet, in July 2012. They poured their blood and hung banners around the new, half-billion dollar Highly Enriched Uranium Materials Facility there, which stores enough nuclear material to make thousands of weapons. Sister Megan told New York Times reporter William Broad that she and her fellow activists acted to expose “the criminality of this 70-year industry. … We spend more on nuclear arms than on the departments of education, health, transportation, disaster relief and a number of other government agencies that I can’t remember.”

Their witness garnered front-page coverage, worldwide attention and the opprobrium of the Department of Energy, which oversees the Y-12 facility. If found guilty of all charges, the three face more than 30 years in prison. Greg’s wife Michele Naar-Obed, a Catholic Worker, Plowshares activist and mother, is interviewed in Doing Time.

Riegle also talks with earlier activists about the heavy burden of long jail sentences, and interviewed spouses of Plowshares activists who talked frankly about the difficulties of maintaining and building a loving relationship while separated by prison, and spoke with a young Plowshares activist sentenced to eight years in prison. She related to Riegle her struggles with her family and with feelings of powerless in prison, and she now says: “I would not do it again… today, I would only be willing to face such an extreme consequence — eight years in prison — for actions that are directly saving a life.”

In his second inaugural address, President Barack Obama paid homage to the activists of the past by referencing Seneca Falls, Selma and Stonewall. Scapegoated, jailed, beaten, misunderstood, alienated — those activists paid a high price for their work and witness. By collecting the thoughts of some of today’s strongest resisters in this engaging, soul-searching and honest volume, Rosalie Riegle helps inspire and motivate us for the long haul of peace work. Let’s do it again!

As the movement for black lives shifts to policy, several options emerge

What the Parkland teens can teach Medicare for All campaigners