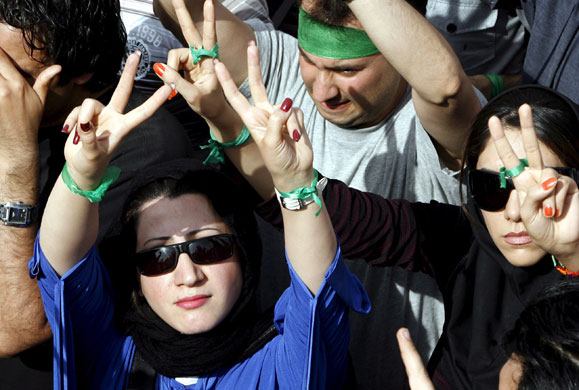 As the whole world watched the tragic death of an Iranian female protester named Neda this weekend, news coverage shifted from the uplifting and defiant non-violent struggle of the Iranian people to the brutal crackdown of the Iranian regime. This has naturally led many to question the effectiveness of nonviolence.

A Los Angeles Times story called attention to this phenomenon and cited a comment found under a protest video posted on YouTube:

“Someone pointed out Gandhi and MLK as an example of peaceful protesting. Here’s my take on that: MLK was not facing a dictatorship, so it doesn’t apply. Gandhi had a unique situation: peaceful protest worked here because he only had to convince the people of India that they should not be governed by foreign powers (England). In Iran’s case, there are no foreign powers to rise up against, only a dictatorship that also happens to have millions of local supporters. Violence is necessary here.”

This sort of argument manifests itself quite frequently among those with only a cursory knowledge of nonviolence.  It seeks to imply that nonviolence doesn’t work against dictatorships (even though it has, e.g. Pinochet in Chile, Marcos in the Philippines and Milosevic in Serbia). It also implies that Gandhi and King succeeded because they were fighting civilized opponents who were unlikely to mow down a bunch of peaceful protesters. But we can’t forget the lynchings that occurred in the South while local authorities looked the other way or the fact that King’s own house was bombed by segregationists. Are they not comparable to Ahmadinejad’s “millions of local supporters”?

Many lives were lost in the Indian independence movement as well. One glaring incident, known as the Amritsar Massacre, saw 90 British soldiers kill nearly 400 unarmed men, women and children and injure over a thousand without warning in less than 15 minutes at what was nothing more than a religious holiday and harvest festival.

So, to say that either of these men and their movements had it easy overlooks the great deal of violent opposition they faced and the immense courage and dedication it took to remain nonviolent. For this reason we must be wary of those calling for an intervention in Iran or an arming of the protesters. But not for this reason alone.

We have also forgotten another valuable history lesson, which is that the Iranians have used nonviolence before to overthrow a brutal and repressive regime. After 25 years of rule by the US-installed Shah, Iranians took to the street in 1979, waging boycotts, strikes and non-co-operation. In the book “Unarmed Insurrections,” author Kurt Schock gives full credit to the nonviolent movement, stating, “The lifeblood of the shah’s regime was drained by mass civil disobedience.”

While it is sad that this Islamic Revolution paved the way for the current regime, which violates all sorts of human rights, we must convince ourselves that the last thing thing the Iranians need now is our help. Chris Hedges expounded on this point in a recent article titled, “Iran had a democracy before we took it away.”

Iranians do not need or want us to teach them about liberty and representative government. They have long embodied this struggle. It is we who need to be taught… We are the biggest problem in the Middle East. We have through our cruelty and violence created and legitimized the Mahmoud Ahmadinejads and the Osama bin Ladens. The longer we lurch around the region dropping iron fragmentation bombs and seizing Muslim land the more these monsters, reflections of our own distorted image, will proliferate.

There’s no reason we can’t lend our moral support to the protesters in the street. But to call for violent resistance, perhaps backed by foreign militiaries, would only serve to set the Iranians back even further than we’ve already done.

Boggs standard time — in Detroit and beyond

Don’t give up on nonviolence in Iran