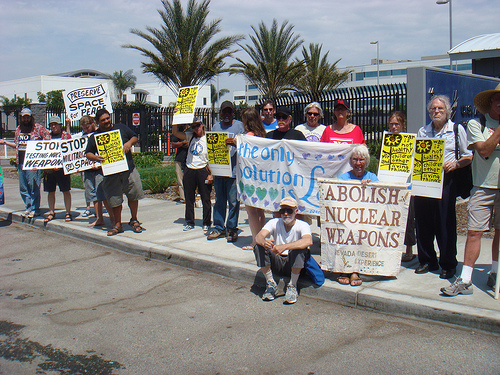 Last Saturday, about 30 activists demonstrated outside of the Los Angeles Air Force Base (LAAFB) in El Segundo, CA. The “Space and Missile Center” located there is used to monitor launches from Vandenberg Air Force Base (VAFB) about 160 miles northwest of LAAFB. The timing was set to precede the test of a Minuteman III Intercontinental Ballistic Missile (ICBM) from VAFB early the next morning. The Vandenberg and El Segundo bases are also used to receive and distribute communications via satellite for the targeting of conventional weapons by ground forces and airplanes as well as hunter-killer Predator and Reaper unmanned aerial vehicles (UAVs). These air-strikes are increasingly implicated in widespread civilian casualties despite attempts by the military to downplay them and reduce their number.

There hadn’t been a demonstration at LAAFB for many years, so this was seen as groundbreaking by the organizers. Given the obscurity of the base, and the lack of recent organizing about its mission, the turnout was seen as encouraging. More actions will probably be forthcoming.

From midnight until 3:30am Sunday morning about a dozen people also demonstrated outside the main gate of VAFB. Despite the late hour, there was a fair amount of traffic as some members of the base community and press arrived to watch the launch from an official viewing site. At 1:30 am, Fr. Louis Vitale, OFM and Sr. Megan Rice, SHCJ tried to enter the base to present a letter to the base commander from Japanese opponents to such missile tests. A guard did take the letter, though she did not unequivocally state that she would deliver it. When the two activists were stopped from entering the base they knelt and prayed. The citations mentioned “entering federal installation without permission.” They were released about an hour later and escorted across the highway from the base entrance. Future legal proceedings are “to be determined;” no date for court appearances were set.

The Japanese letter, signed by over 150 people and groups, made the point that the US frequently tests ICBMs that in fact are functional, can travel over 6,000 miles, can be launched on a moment’s notice and can carry three nuclear warheads. Such tests make it hypocritical to seriously reprimand or sanction North Korea for its recent missile tests, which would actually take 2 to 3 days to prepare for launch, only can travel several hundred miles, are not inter-continental, and as yet aren’t able of being loaded with nuclear bombs. Until the actions opposing Sunday morning’s test launch, they were unaware that the US was testing ICBMs too.

The Minuteman III, expected to launch from Vandenberg Air Force Base (VAFB) at 3am to the Reagan Test Site in the Kwajalein Atoll (in the Marshall Islands, 6,000 miles away in the South Pacific), actually lifted off at 9am because of some particularly inclement weather in the target area.

Vandenberg Witness (VW) is comprised of a collection of groups actively pursuing disarmament, not merely arms control nor maintaining or furthering the U.S. push for “full spectrum dominance” in all things military. VW opposes the use of satellites for making and controlling air strikes from unmanned drones as well as the threatened first-use of nuclear weapons and selective threats against countries for their (legal or illegal) nuclear programs. These all represent steps backwards in the global goal of increased peace, cooperation and nonviolent resolution of conflicts. VW also attempts to bring to light the plight of the Marshallese, especially the former inhabitants of Kwajalein – which is home to one of the world’s largest coral reef atolls and lagoons – who have been forced to live nearby on tiny Ebeye Island in one of the poorest and most densely populated places on Earth. Current residents of Kwajalein are mostly US Army contractors working at the Reagan Test Site.

Keep Space for Peace Week, October 3 to 10 will be a time to bring more awareness of the use of space to target weapons that are increasingly implicated in the killing of civilians and widespread surveillance, which causes social and political disruption and dislocation. For a list of sponsors and endorsers of the August 22-23 actions, visit the Vandenberg Witness website.

Jim Haber is a long-time social justice organizer from the San Francisco Bay Area, active on a wide range of issues. He has been a member of Jewish Voice for Peace since 2000. Jim was on the National Committee of the War Resisters League from 2002 to 2013 and the steering committee of World Beyond War from 2014 to 2016. He helped manage a San Francisco soup kitchen for over twenty years in the Mission. He helped pioneer the Prevention Point needle exchange program for HIV prevention during the 1990s. Jim is also a Certified Laughter Yoga Leader.

The Radical Independence Conference’s promise of “another Scotland”