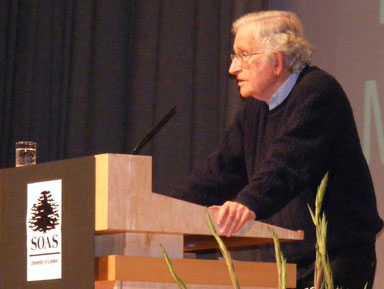 Noam Chomsky gave a talk in London last week in which he explained how protests against the Iraq War actually had a positive effect:

“In the Iraq war, there were massive international protests before it officially started… and it had an effect. The United Sates could not use the tactics used in Vietnam: there was no saturation bombing by B52s, so there was no chemical warfare – (the Iraq war was) horrible enough, but it could have been a lot worse,” he said.

“And furthermore, the Bush administration had to back down on its war aims, step by step,” he added.

“It had to allow elections, which it did not want to do: mainly a victory for non-Iraqi protests. They could kill insurgents; they couldn’t deal hundreds of thousands of people in the streets. Their hands were tied by the domestic constraints. They finally had to abandon – officially at least – virtually all the war aims,” said Chomsky.

“As late as November 2007, the US was still insisting that the ‘Status of Forces Agreement’ allow for an indefinite US military presence and privileged access to Iraq’s resources by US investors – well they didn’t get that on paper at least. They had to back down. OK, Iraq is a horror story but it could have been a lot worse,” he said

“So yes, protests can do something. When there is no protest and no attention, a power just goes wild, just like in Cambodia and northern Louse,” he added.

Not only was this analysis surprising coming from Chomsky—as opposed to, say, Howard Zinn—but it is just surprising in general. When it comes to dissecting the opposition to the Iraq War, one tends to hear more about the way in which it fizzled out after the invasion. While that’s still worthy of despair, this shows that we shouldn’t write off the power of protest, no matter how small or scattered.

From #JusticeForTrayvon to #BashMob — a cautionary tale for online organizing

Nigeria’s #EndSARS movement has suspended protests, but vows to come back stronger